While Robin was on vacation in Santa Fe, New Mexico, Cheddar’s left front paw swelled to epic size. U.H. was worried about the little Cheese, so she took him to the local veterinary clinic during Saturday walk-in hours (this was not nearly as easy as it sounds here). The nice doctor thought Cheddar might develop and abscess, so she gave him two shots and sent U.H. home with a liquid antibiotic for him. 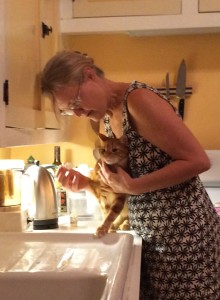 U.H. doesn’t like to give kitties medicine. That’s Robin’s job, which means Cheddar had to wait till Robin got home from New Mexico to start his oral antibiotic. I have watched from a safe distance while Cheddar got his medicine. Robin gathers him up from wherever he is at the time and takes him into the kitchen. He gets to stand on the kitchen counter to take the stuff, which smells like either banana or cherry, we think.

I forgot to mention that she takes the medicine out of the refrigerator before she finds Cheddar and draws his dose up in the dropper. Cheddar doesn’t much like getting his medicine, so she tries to make it all go quickly.

Robin has Cheddar face away from her and she wraps one arm around his chest. He either butts up to her tummy or fits into her armpit. She holds him so he can’t back up. This is sneaky on her part, I say. 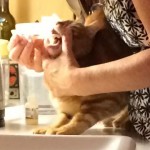 When Cheddar is in position, she grabs the dropper from the medicine bottle and puts the opening end at the corner of his lips, about where his big, back teeth are. It doesn’t matter if he opens his teeth because she squeezes the milky, banana-or-cherry-smelling liquid in behind his lip. Although Cheddar doesn’t enjoy taking his medicine, most of it gets into him. 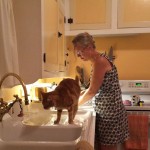 After he swallows his medicine, he always gets some treats. When Cheddar has had treats, we are all invited to come into the kitchen to have treats too. We sit or shake paws with Robin because we are happy she loves us enough to give us treats, or medicine when we need it.

The swelling in Cheddar’s paw went down right away after his injections at the vet, so Robin never got to see how big the paw got. U.H. said she thought about taking a picture of it, but then she wanted everyone to think of Cheddar when he’s healthy, not when he’s sick.

It turns out that Robin got sick on vacation or maybe even before she went on vacation. She went to the human vet and found out she has an ear infection called swimmer’s ear. She used to get swimmer’s ear when she was a kid and swam every day. She’s puzzled by this infection because she’s only been swimming twice all summer. Maybe it was the hot springs in the mountains in New Mexico. I don’t know, but I can report that she swallows antibiotics three times a day and gives herself ear drops twice.

No one gives her treats.

2 thoughts on “In which Cheddar and Robin take antibiotics”