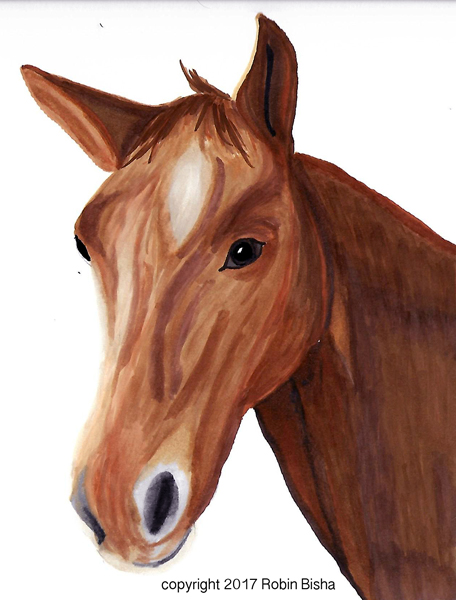 My friend Carolyn’s horse died last week. I worked at home the day Ginger Rose died, so I wasn’t there to hug her and cry with her. I knew I wanted to do something comforting for her, but I didn’t know what. Food and flowers didn’t fit. I thought of making my next papiere mache project a horse. If I did, it would be a long time before my friend received her comforting gift. I thought about decorating a model horse, you know, the ones from Breyer that I had when I was a kid. Again, that could take a long time. A model horse felt like I was trying to substitute something wholly inadequate for my friend’s beloved companion. 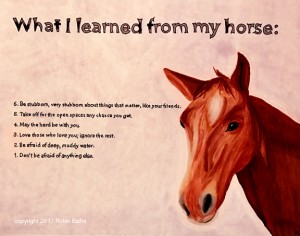 In the end, my friend helped me decide when she posted a list of wise things she learned from Ginger Rose. I drew a likeness of Ginger Rose with Copic markers on 11 x 14″ paper , which involved working with several pictures of her and reference photos of some other horses to render her in the position I wanted and without a halter or bridle. She’s free now. She has no need for halters, bridles, and ropes. Next, I filled in the background with a light lavender-blue and a rosy glow around Ginger Rose. Finally, I added lettering of my friend’s list of things she learned from Ginger Rose.

This morning I gave Carolyn the drawing. We laughed a little about not crying on it because the marker would run. Then, she told me how she had been sad and missing Ginger Rose. She was laying in bed and had the thought that she didn’t want to regret something she didn’t have anymore. Instead, she wanted to remember the relationship she had had with her horse. As soon as she thought that, the list of things she learned popped into her mind, and she wrote them down. We had a lovely conversation about the partnership she felt with Ginger Rose and what it means to her to have had that relationship. I have known Carolyn for 15 years, and can confirm that her relationship with her horse changed her in happy ways. I hope she carries her love for her horse and the lessons she learned forward into the next years.

Carolyn’s list got me to thinking I should list all I have learned from my cats and from the rescue dogs I’ve worked with. One of my cat-loving friends and I started playing with items for the list, such as licking someone who has the place you want to sit in until she gets tired of you and moves. Maybe not such a practical bit of wisdom for a human, but I’ll come back to my own list later.

Meanwhile, I tried to get a good scan of Ginger Rose on the lavender background before I added the lettering because I had a feeling she would like to teach people more. The scanner wouldn’t pick up the faint color, but at least Office Depot didn’t charge me for the failed scan. I figured the universe was telling me I didn’t need to preserve this version of the piece. I went home and added the letters. Later, it came to me that I could build on Ginger Rose’s wisdom in three ways.

Carolyn plans to frame the piece I made for her (Copic ink wants to be protected behind glass) along with some of Ginger Rose’s mane. I’m moved to be able to offer support to her as she heals. I also felt healing in talking with her about her relationship with Ginger Rose. I hope I can help spread Ginger Rose’s wisdom to other people who are healing. I never met Ginger Rose in person, but I feel her gentle, fearless wisdom moving in me.

Please, let me know if you would be interested in participating in an online course or workshop building a legacy of healing inspired by Ginger Rose and Carolyn.

If you are looking at this post in email, you may need to visit our site to see the images.