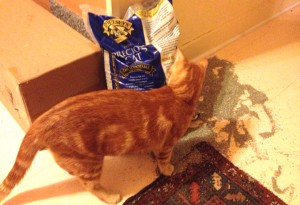 The Cheeses worked hard tonight to help Robin with the litter boxes.

She carried the new bag in from the car (it’s been riding around in there for more than two weeks) and set it down while she chatted with U.H. about this and that. Meanwhile, she could hear a pluck, pluck, plucking in the other room. When the sound stopped, she thought the kittens had grown bored with the activity and given it up. 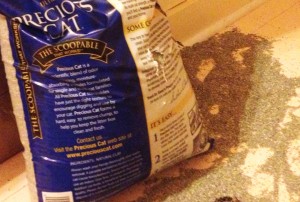 The holes are well placed, right in the middle of the bag. The litter pours out really well.  Except that it pours out whether the human wants it to or not. She filled the main litter boxes to 3 inches, and the litter still could spill out.

Robin swept up the litter that was all over the floor. Cheddar helped a bit with the cleanup, but Brie was just to tired.

4 thoughts on “The Cheeses Help with Kitty Litter”