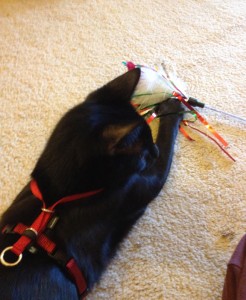 Our human finally has some time to breathe, she says, just in time to help us get ready for Christmas!

Since the Cheeses are just little boys, they got to have Christmas early. Well, really, those Cheeses are growing fast. I’m not bothered at all that they got presents first because I’m glad I’M not getting what THEY got: new harnesses, size Medium. (You can see the little “M” in the middle of Bleu’s back. 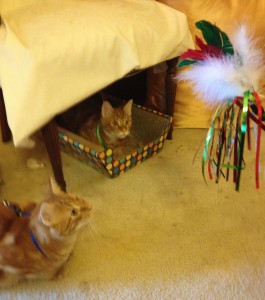 Yes, all four Cheeses outgrew their size Small Come With Me Kitty harnesses. In fact, they haven’t had any harnesses on for a whole week because Robin realized they were being squeezed. They also got TWO new interactive toys, which they already got to play with last week. 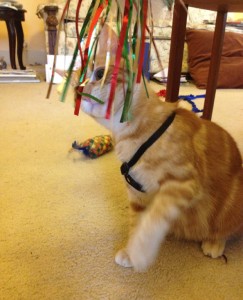 Although they make me a bit nervous, those Cheeses do look cute in their harnesses.

Brie was the littlest when the Cheeses arrived at our house in September, but now he is the biggest. He really likes to eat, and he was proud of how he looked in his new harness. Brie wears black, always.

Cheddar wears blue. Colby wears green (when he hasn’t eaten his). Bleu wears red, in spite of his name, because Robin and U.H. think he looks gorgeous in red. 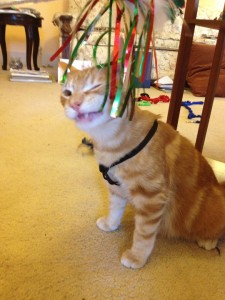 With all the Cheeses in different colored harnesses, it’s easy to tell them apart. Otherwise, Colby and Cheddar look about the same and Brie’s tail is like Cheddar’s but they aren’t really the same color. I’m much lighter in color than any of them.

We mistake Bleu for Reggie all the time. I even yell at him until Robin or U.H. can convince me that he is just a kitten, and not Reggie. 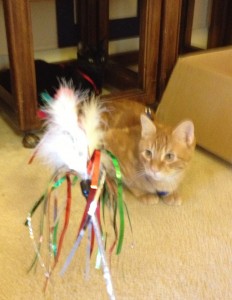 Bleu didn’t like his new harness today and wouldn’t get up and walk around. Robin says he was being petulant. He liked the size Small harness and walked around just fine. She played and played with the Christmas toy, which she knows Bleu likes because he played with her student Laura last week (while wearing his size Small red harness), but he just batted at it a little and went under the table.

Colby seems to like size Medium better. Cheddar likes humans so much that he doesn’t really care what they want him to do, he just does it.

The Cheeses have some room to grow in their Christmas harnesses.

4 thoughts on “The Cheeses Got Christmas Before Everyone Else”