Have I told you that we are letting Robin spend time with her dog friends almost every day this summer?

She has a really nice friendship with Jack, the senior dog in the family at the Mosheim Mansion. Robin has known Jack since she started going over to Asylum Rescue at the mansion last year. This summer, Jack is her training buddy. They go walking most mornings and take the AKC Canine Good Citizen preparation course at Thunderpaws Canine Solutions together.

Jack also took a course with Robin in Austin in May, you may remember. He’s wearing the harness that they learned to work with at that class. Jack is helping her learn a lot about teaching dogs. We all thank him for being so tolerant of her.

She realized the other day that she only had one picture of Jack, so she took some this morning.

Jack is the first dog Carol rescued from the shelter here in Seguin about five years ago. He was an adult dog then, but he was so thin Carol could carry him under one arm. She nursed him through heartworm treatment and gave him good food to get him healthy again. Jack has only one eye, and no one knows what happened to him. A psychic told Carol that someone had shot him. That wouldn’t surprise us.

Robin hasn’t asked Jack to talk about the old days. She’s just grateful that Carol rescued him and gave him a great home. Robin is also grateful that Jack wants to be her friend. 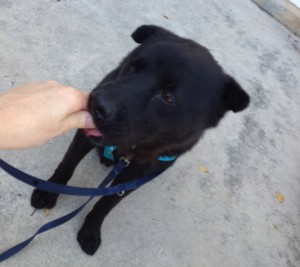 The other day Robin took Angel for a walk before she went with Jack. Jack came by the back gate and saw them walking. He let out one bark to get Robin’s attention. She told him she’d be right back to get him for his walk too. When Robin and Angel (who is recovering from heartworm and emaciation now) got back into the house, Jack was waiting at the back door.

We kitties are grateful to Jack for taking our Robin for walks, so we can stay inside in the air conditioning.

2 thoughts on “Thank you, Jack”