We sent our human to the conference of the International Association of Human-Animal Interaction Organizations in Chicago this weekend. (The veterinarians’ national conference is there too, but let’s not say that too loudly.)

She has already learned stuff!

These humans get right to work with presentations at the opening cocktail reception (which a number of therapy and service dogs attended, by the way)! Scholars and practitioners presented posters that described their work and their conclusions from it. 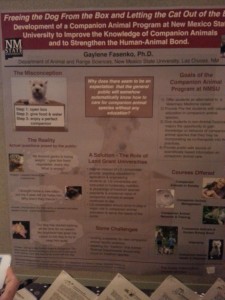 Robin told us about the research that most caught her attention from Gaylene Fasenko at New Mexico State University. Professor Fasenko started an academic program focused on companion animals. She said NMSU gave her freedom to develop the courses she thought necessary in the program. There are four courses and an internship. One of the courses is for aspiring medical professionals to understand all aspects of companion animal care and behavior, as well as the importance of the human-animal bond.

Professor Fasenko and her students are doing important research on questions that are really important for dogs and cats. For example, she has surveyed people to learn if they respond differently to people walking on the street with or without dogs. It turns out that humans are more likely to speak to humans who have a dog along with them. They are ALSO more likely to trust a human with a dog than one who doesn’t have a dog companion.

I wonder how other humans would respond if we went outside on walks with Robin?

7 thoughts on “Our Human’s at (Another) Conference”