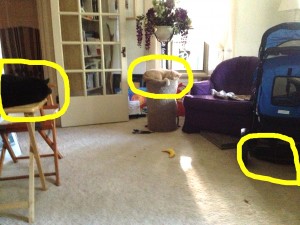 I mentioned a couple of weeks ago that I am mostly used to Reggie, but I haven’t talked about any of the other kitties who are involved in the big training program at our house this summer. (I didn’t tell about my backsliding incidents either…)

We are all getting used to me. When Robin sees us all relaxing in the same room, especially when all of us mancats are nearby, she cries.

It has been a long road to get here, and I have had to move the process along, or I would probably still be hanging out in the dining room. Now, I go wherever I want during the day and spend the nigh in my room.

Nutmeg and Lexie first learned how to open the screens on the dining room doors. They have been going in and out all along, from about day three. Karma goes in and out too, but sometimes she just runs at the screen and it falls down. Usually, this is because she is trying to chase Lexie, but that’s a story for another day.

I watched my sisfurs and decided that Nutmeg and Lexie had the right idea. I studied them for a day while Robin was away. When I tried their paw techniques, the screen opened! I went out in the garage and hung out on the gray blanket for a while before UH found me.

By the way, no kitties close the screens when we go through although I think we could.

After I learned how to open the screens, UH stopped trying to keep them closed. I have been going all over the house. Well, not upstairs because Belle says I can’t come in her territory. Belle tolerates Karma and Meggy, but she hisses and growls when any of the rest of us come upstairs. She chases and fights with Reggie, so at least we’re on the same team for one thing!

It hasn’t been easy, but we are working out our differences. I only yell at Reggie when I’m wildly overstimulated or tired. I’ve chased him a couple of times, but not too seriously. (There have been several incidents that sent me into time out.)

Reggie spends a lot of time on the catio, and he has a special place on top of some shelves in the garage. He hisses at me every now and then, and I’m starting to pay attention to him. He doesn’t like it that I search for him, but he doesn’t get upset if I stay quiet and don’t get too close. I just don’t feel safe around him. Robin keeps telling me Reggie has changed, but I don’t believe her.

When I first started coming out of my room, Becket ran and hid, but now he seems happy to see me. We tap noses.

I get along great with both Meggy and Lexie. No change there.

And Karma is Karma. Sigh.

2 thoughts on “Getting Used to Me”