Today Brie and Bleu and I went to the vet, just for fun. Since it was the first time we went without the aim of treatment or vaccinations, the cats were not sure this could ever be “fun.” They told me all about it as we walked out and got in the car and for the first few miles.

I promised them no one was going to do anything stupid. They settled in for the ride, each in his own carrier, facing each other on the back seat.

They spoke up every now and then if we hit a bump or there was a loud noise, but they did not sing for the entire half hour (unlike some cats we know!). Somewhere along the way, Brie ate the freeze dried turkey treats I had given him at home. Bleu isn’t really fond of treats, but I had given him a couple of his favorite kibbles.

We waited for just a moment in the lobby with our yoga mat and blankies.

This was an actual follow-up appointment for Brie after a respiratory bug he had a couple weeks ago (after Cheddar and Colby had it, so we knew what to do), and it was the first time our wonderful vet had seen him since he was in the hospital in January. Mostly, however, this was the first visit in our training plan to prepare Brie if he ever needs to board at the vet. Our doctor suggested that he would feel more secure staying at the clinic if he had one of his brothers with him. I chose Bleu as the most-likely-to-feel-comfortable-at-the-vet Cheese.

I want the brothers to be happy to go to the clinic, so I brought Brie’s current favorite treats and the kibbles Bleu likes best. I thought they wouldn’t eat this time (they have no reason to believe me that this is fun yet), but treats from the humans at the clinic could convince them that we were really having a fun outing. 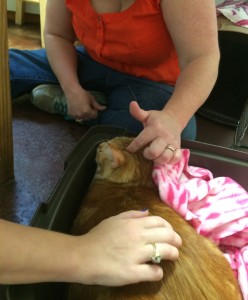 I unrolled our yoga mat, set the carriers down, sat on the mat between them and opened their carrier doors. They did not come out.

Brie buried his head in his mat. Bleu looked at me. We took the lid off Brie’s carrier and gave him his blankie. The vet tech picked him up and carried him out of the room to weigh him. I heard only one protest meow before Brie came back. (Brie weighs 17.4.) Our doctor came in and sat on the floor with us. Brie hid his face while they gave him pets and checked him all over with hands, stethoscope, and otoscope. Our vet tried to get him to play with the light from the otoscope, like one might with the laser light. She said she saw him twitch his ear in response. After the exam was over, Brie lifted his face and got some pets on his head. Both the vet and the tech gave him treats, which he sniffed and may even have licked.

After we reassembled Brie’s carrier, we took the top off Bleu’s. The tech took him out to weigh him (18 pounds!), and then the petting began in earnest. Bleu relaxed. He rubbed his happy, little face on everything he could without actually getting up. He purred. He totally charmed our doctor. I began to suspect that BLEU is the Cheese with the therapy cat calling.

We made another appointment for next week. Before we left, the doctor stuck her head back in through a crack in the door to ask, “Is Bleu coming next week, too?”

Next week, we’ll first take them in their carriers in the cat room where they would board if I had to go away. They will smell the other cats there and might find that scary or challenging. Then, we’ll take them to the examining room and pet them and give them treats. Maybe next week they will actually eat the treats. Maybe Brie will keep his head out of his blankie. I’m certain Bleu will get as many pets as possible!

Why am I taking the cats, in particular Brie, the most anxious and vulnerable of the Cheeses, to the vet when they don’t need any services? That’s exactly why.

I’m not stressed about what’s going to happen to them. They key off me that this is not a big, bad thing. They learn that NICE PEOPLE work at the vet clinic. Next time it won’t be so hard for them to kennel up and go. We are going every week this summer. We are going until getting in the carrier, riding for half an hour, and hanging out at the clinic becomes a great part of their day.

If you have a kitten, you can start her out on a life of voluntary participation in health care by taking her to the vet, for fun.

If you have an adult cat who is nervous about going to the vet, take him to the vet, for fun. The first time won’t be a lot of fun. I guarantee you. It will be just like it usually is, probably. Except YOU might be calmer. Your cat will key off your emotions. Go again. Take even better treats. Take toys. If your cat has some pleasant human interaction and no stupid stuff (like SHOTS!), there’s a good chance this training will change your cat’s attitude about going to the vet. And it will probably change yours too.

P.S. Next week they are getting rotisserie chicken.

7 thoughts on “Training Tuesday: Go to the vet for fun!”