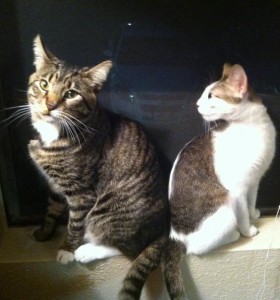 I realized yesterday that I left everybody hanging about Lily! We were dealing with all kinds of other stuff, and the good news slipped my mind. I apologize!

Lily moved to AUSTIN, Texas, with her new mom and kitty brother. Her mom was a student at Robin’s university and took some classes with her. She fell in love with Lily through pictures but told Robin to keep looking for an adopter because a lot had to fall in place for her to be able to adopt the kitten. Robin tried pretty hard to find other candidates, but I guess the bond had already formed. Lily waited. Her new mom graduated, found an apartment with a couple of roommates who had been missing cats in their lives.

After graduation, Robin took Lily to meet her new mom and her new kitty brother. Actually, Lily met four humans and two cats on that trip, and she kept her cool just fine.

Lily’s new brother hadn’t been neutered yet, so U.H. gave him the surgery as a present.

On Friday after her brother’s surgery on Tuesday, Lily’s new mom came to our house, put Lily in a carrier, put the carrier in the front seat of the already crowded car, and drove off to Austin. We’ve had a few reports of things going well. Lily settled in faster than her brother. She had a great window to observe the neighborhood. Lily and Momo getting to be friends. Judging from the picture, she really admires him! (Nutmeggy should take some lessons from Lily about respecting your brothers!)

We got the picture of Lily and her new brother from her human mom.

2 thoughts on “Lily’s Family Found Her!”