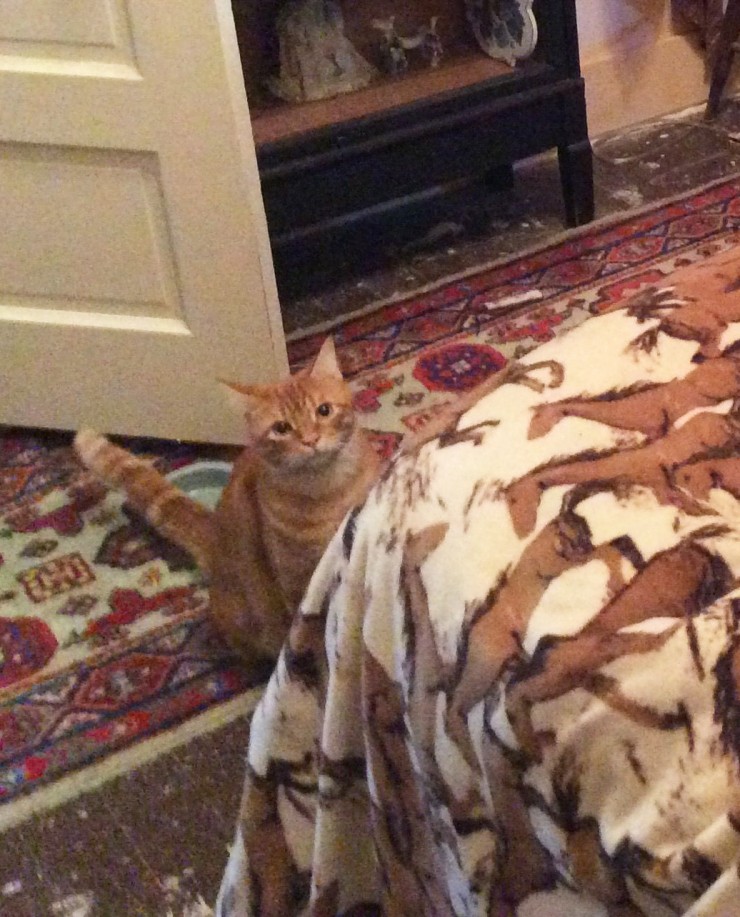 Cheddar thinks he hasn’t been learning anything lately. He loves training sessions. He enjoys learning new behaviors, like shake, press a button with his paw, sit on a mat, jump over a hurdle, ride on the skateboard, meet guests. He REALLY likes showing off the behaviors he knows, regardless of who has been asked to perform them. He needs to develop the ability to let someone else be the center of attention for at least a moment, and to let the other cats finish their meals and treats. We work on stay on the mat, but sometimes as we move through our day, we don’t actually get to the mats.

I have a fancy new training tool, a nifty automatic feeder with lots of features, called Pet Tutor, that I planned to use to keep Cheddar occupied while Brie was getting his inhaler puffs. Before I learned how to use the Pet Tutor or got the cats used to the sounds and the way the feeder spits out treats, Cheddar and I came up with a training exercise that works so well that he doesn’t realize he’s been training. (I wish my college students could both have as much fun in formal training and develop their skills as obliviously as Cheddar does!)

Cheshire likes to eat on my bed, and he gets to because his anxiety levels just won’t let him swallow food when other cats are around. He has trouble even eating one very desirable treat unless he feels super safe, but that’s a story we’ve told many times before. Cheddar liked to jump up on the bed while Cheshire was eating and flirt with him, rub on him, and nudge him out of his food dish. Naughty Cheddar.

I began to ask Cheddar 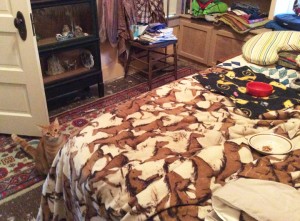 to sit on the floor while Cheshire eats to wait. He knows what he’s supposed to do when I say wait, and we also have a hand signal borrowed from my dog training lessons. If he stays on the floor, he gets Cheshire’s leftovers. If he jumps up and nudges or stares at Cheshire, he doesn’t get anything at all. I pet him while he waits sometimes. When we first started this training, I gave Cheddar a treat or two while he waited. He still occasionally jumps up on the bed to see how Cheshire is doing with his food. What does Cheddar get when he does this? Put back down on the floor.

Cheshire is gaining his confidence back and often eats most of his canned food portion now, leaving Cheddar a symbolic chunk or two.

This training also has had an effect on Cheddar’s politeness while Brie gets his inhaler puff in another room. The other cats have, of course, realized that Brie makes the “magic box” of treats happen in the sun room. They swarm him as we get situated for his treatment, walking in front of his face and rubbing on him. Usually, the “not Bries” arrive at the treatment spot before Brie and I do. After the daily lessons in self control that accompany breakfast and dinner with Cheshire, Cheddar comes in and sits on a carrier, or on a step on the ladder (for the cats to play on!), or on the shelf where they watch birds out the window. He joins us only when I get the “magic box.”

The funny part is that he thinks he’s not doing anything. Really, he’s doing a really important thing: giving the other guy space. I’m going to pair this behavior with the word “space.” Maybe then Cheddar will realize that I haven’t been ignoring his training for three months! In the meantime, I have started to ask him to jump over Nutmeg’s hurdle…

Congratulations to Angel Ms. Phoebe and family for winning last week’s giveaway of What is My Cat Saying? We’ve decided to give away a training resource once a month, so more to come!!!

One thought on “Training Tuesday: Sometimes Training Looks Like Doing Nothing”