Bleu has grown so much that he is now as big as Reggie and a bit taller. Reggie is a black smoke cat and Bleu is jet black, and Bleu has the longest tail of anyone in the house, so theoretically, the humans should be able to tell the two of them apart. But they can’t.

Robin put a gray dot on Reggie’s back to help her out.

Seriously, Revolution took a little bit of Reggie’s fur, and Robin has found it a convenient way to tell them apart.

I can tell them apart, no matter what. I still yell at Reggie every now and then and I DO NOT WANT him on the bed when I’m there. However, Bleu is allowed to be there, and Reggie has tried out MY bed when I wasn’t around. I don’t really like that, but, well, what the heck. Maybe it’s time to let bygones become bygones.

Robin here: We have tried so many options for flea control for Reggie, and all have failed us in one way or another. He’s had injections, pills, Revolution, other topicals. Either his fur falls out or the remedy fails to prevent fleas from making their home in his fur. Ideally, we need to make a flea-free environment. This is a challenge in Texas with a catio especially.

We are open to all suggestions for cat-based and environment-based anti-flea solutions!

Bleu says this picture of him is not flattering and he wants another. Here he is with his brother Colby helping me with my research. 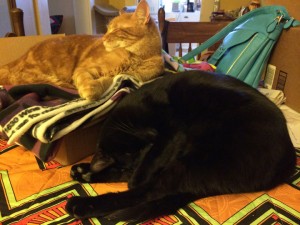 2 thoughts on “The Gray Dot”