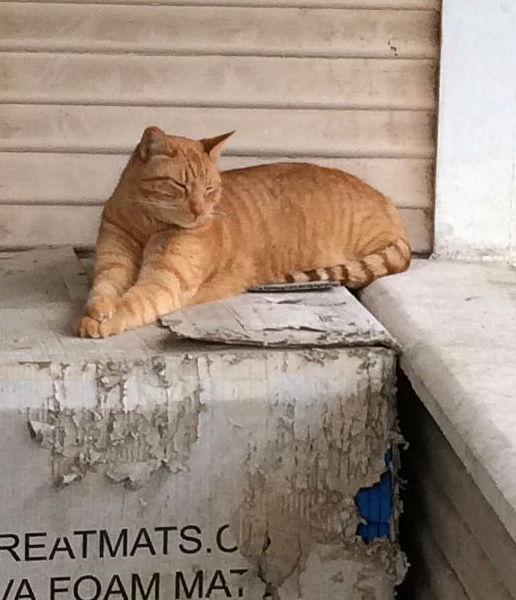 Huck turned up about 10 days ago holding his paw up and hopping on three legs. Robin was away playing with horses (where she pinched her left hand in a gate the same day Huck hurt his arm, and otherwise had an amazing time!), so U.H. was in charge. She waited to tell Robin about Huck’s apparent injury until she got home from her equine adventure.

Huck doesn’t like to go to the vet, which is putting it mildly. Actually, he has to be sedated for a vet to help him. U.H. and Robin decided to keep an eye on his arm – he was holding up his right front paw – in hope that he would just start walking normally and everything would be back to normal for him. The humans were concerned about him getting away from whatever he’d been engaged with when he got hurt, but the alternative of wrestling him into a carrier, where he would throw himself against the sides and have to have a tent put over his carrier with sedation medicine wasn’t more appealing.

After six days, Huck was still hopping on three legs, but he didn’t have any swelling and didn’t have any signs of infection. He still had scabs on his ears from the marks that told Robin his injury came from some kind of animal – animal conflict in the first place.

Robin didn’t know what to do, so she called one of her wonderful students, who has applied to veterinary school and has worked at vet clinics a lot (and even at the zoo!) and asked if she could come over. Robin thought Huck might let her student touch him because she has seen this student has a great rapport with cats. 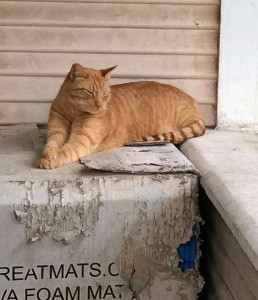 Huck did the best he could, however, and extended his arms for the humans to examine from about 12 feet away.

Robin’s student got as good a look as she could and based on what she’s seen with other kitties, they decided to watch Huckie a little bit longer. She said he might have a muscle wound from a bite (kind of like Robin’s pinch from the horses’ gate!), a sprain, or even a hairline fracture in his forearm. Robin had TTouched him all over and he didn’t flinch, but TTouch is very, very gentle, and Huck really trusts Robin in the first place.

It was likely that the vet would tell the humans to keep Huck’s level of activity to a minimum, and he was doing a pretty good job of that already! They also might give him pain medication, but that might not be so good for a garden kitty.

While the humans were talking about him, Huck stayed right where he is in the picture, on the porch. That is, until one neighbor started her lawn mower, another neighbor turned on his leaf blower, and the UPS truck went by all at the same time.

The humans decided he would be able to get away if he needed to. They also saw that Huck was able to put weight on his front paw. And, they followed him around to the side of the house and saw that he was ok after his run.

Today, Huck is still hopping around most of the time, but he’s also putting his weight on his right paw and walking kind of normally. Robin says her hand still hurts a bit from the gate pinch, so it makes sense to her that Huck will need more time to heal completely.

We are glad he’s doing better and was able to avoid the trip to the vet this time.