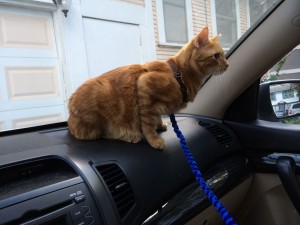 Cheddar continues his training to volunteer as a therapy cat. He’s practicing remaining calm when Robin drops things and getting used to being in the car.

The part about objects dropping and loud noises seems like a slam dunk for him. As long as no other kitties are around, Cheddar could sleep through a book case or lamp falling over. When any of the rest of us take fright and scramble, however, he runs with us. None of us will be there when he goes for his evaluation for Pet Partners; probably a good thing. 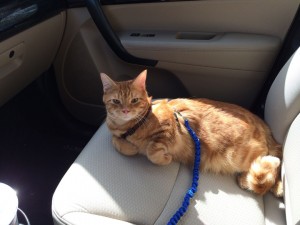 As for the car, he doesn’t mind riding in the car much. He goes in the carrier, meows a little, and then gets quiet. Robin really wants him to be relaxed in the car for his ride to evaluation in San Antonio. He will be in the car for about an hour. (Robin says I’m not invited to come along, which is OK with me because I don’t want to go anyway.) Of course, when he’s a therapy cat, he’ll be in and out of the car all the time, too. Robin hopes he’ll find it fun to ride in the car one day soon.

So, yesterday Robin and Cheddar started a program of hanging out in the car. Right away Cheddar went under the driver’s seat. After he came out to have a liver treat, he headed under the back seat toward the storage area in the back. Robin stopped him from going back there, fortunately. 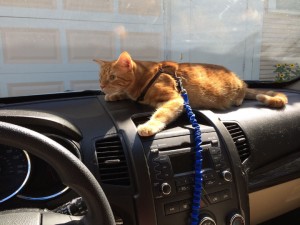 Today, she stuffed yoga blankets under the car seats and cracked the windows jus a tiny bit (it got a bit hot yesterday in there yesterday, although it’s really cool for Texas this weekend). THEN, she suited Cheddar up in Colby’s harness and clipped on the leash. She decided to ditch the carrier, tucked Cheddar under her arm, and went outside. Cheddar was a little taken aback at first and wouldn’t look out the window or eat liver treats, but he got over his apprehensions.

He started hunting birds through the windows and posing for pictures. He’s going to be so excited when she takes him to Sonic for grilled chicken. Shhhhhhh. Don’t tell him! She wants to surprise him.

4 thoughts on “On the Road…. the Driveway, Really”