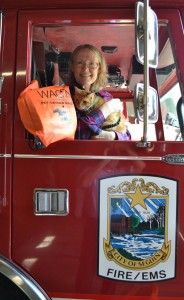 Cheddar says he didn’t expect so many adventures on the road to becoming a therapy cat. Monday he visited a fire station and had his picture taken in a fire truck. Our town, Seguin, Texas, didn’t have oxygen masks for animals on the fire trucks, so ARF (Animal Rescue Foundation) donated some. Cheddar went for a group picture, but it was a bit too much for him to even think about being in a picture with firemen, ARF volunteers, dogs and a big truck. He did enjoy sitting in the big fire truck.

Today he visited the crazy dog ladies at Thunderpaws where he explored the training ring, sat on laps, and had his feet, ears and tails examined. Then he got creative and went in the sleeve of the trainer’s hoodie. All of him in there with her arm. She took the hoodie off and let him have it, but he did have to come out before he could come home. The crazy humans made a silly video out of it! (I’m not sure if you have to be on Facebook to see the link, but I thought I’d post it anyway.)

The photo was taken by Seguin, Texas, public relations. It first appeared on the Facebook page linked above.

4 thoughts on “Cheddar’s training gets interesting”