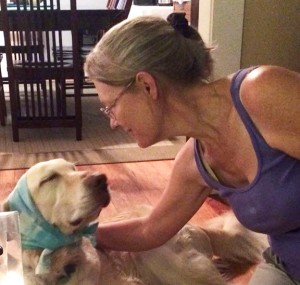 Robin is about halfway through the Tellington TTouch practitioner training. She Ttouches us, does case studies with other dogs and cats, and makes stuff to help her in her practice. One thing she made is called a thinking cap, and since she made it for one of the dogs in the prison training program, our neighbor dog helped her get the design right.

TTouch uses a lot of wraps. To make wraps, they usually adapt elastic bandages to wrap around dogs, cats, horses, humans… You name the creature, a TTouch practitioner has probably wrapped one! Mostly, Robin wraps dogs. She has a lot of standard elastic bandages that are about two inches wide, and she cut some in half for the smaller dogs. Like Chance.

Chance is also in Paws in Prison. He’s coming to Thunderpaws for grooming and staying overnight with his groomer to practice being somewhere other than prison. Chance is a bit nervous about grooming tools and having people touch his feet. He used to be even more nervous. Robin met Chance at Thunderpaws for a TTouch session last week to establish that good things could happen at the groomer. He didn’t get a haircut until this week, but he did get wrapped. The other humans said he looked like a World War I veteran returning from battle in his head wrap and half body wrap. (They do have a point!)

The TTouch founders are concerned about animals looking like they are injured or being embarrassed about their wraps. They encourage students and practitioners to dye the wraps nice colors. Robin met a practitioner who has alpacas, and she crochets wraps from the alpaca yarn. Robin decided to try knitting wraps, especially for the really big dogs and the little dogs. Like Chance. 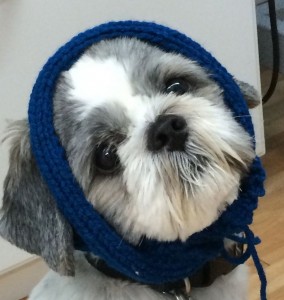 This week, she went to the groomer when Chance was part-way done with his cut and style. Our groomer is really kind and good and had been getting him used to the tools, but Chance got a bit weary of that. When dogs started arriving for training class, he said he was done being styled. Robin wrapped his body and his head again. This time, she tried out a knitted head wrap in peacock blue. Chance looked quite a bit more stylish.

Robin knitted a very long, wide wrap in multicolor yarn. Now she’s doing a wrap in the same peacock blue for a bigger dog. She even has a friend knitting wraps for the animals!

P.S. If you are interested in adopting Chance or one of the other Paws in Prison dogs, let us know! You can check them out on their website.

One thought on “Take a Chance”