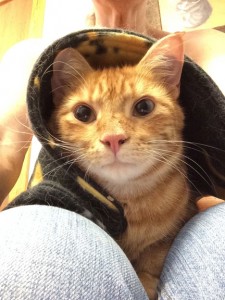 Cheddar took an impromptu trip to the veterinarian this morning.

He pooped a very long length of 1/4″ satin ribbon just before bed last night. Thank Bast, Robin did NOT take a picture of the poop although it was an interesting shape and color. The ribbon was pink or orange to begin with, and turned a deep shade of red inside Cheddar. The little man’s intestines folded that ribbon into neat, accordion pleats on the way through his digestive tract. 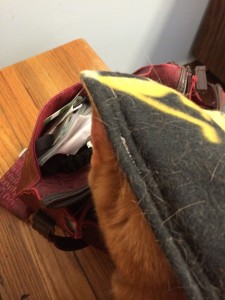 He didn’t get to meet our FAVORITE veterinarian, who has the nerve to take a week off. Cheddar reports that the sub was satisfactory, the tech was nice to him, but Robin didn’t live up to her usual high standard of service. She did not take Cheddar’s pouch! He feels safe in his pouch, but he had to resort to hiding his face in her purse. Next time, she promises, she will take his pouch. 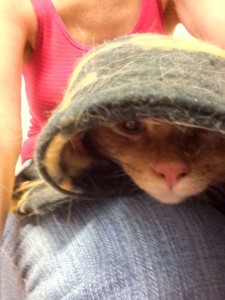 We did learn that the mats Robin made for the Cheeses are purrfect for those times when a kitty needs to be brave but isn’t feeling very confident.

Cheddar stayed on Robin’s lap under the mat the whole time they waited for the vet and then while they waited to be able to use the x-ray machine (the x-ray is in the operating room, and another vet was performing a spay surgery). They offered to keep Cheddar so Robin wouldn’t have to wait, but she didn’t want to leave the little man. (Not so little, really. They said Cheddar weighs 11 pounds!)

The x-ray showed that he’d had a good breakfast and has a lot of poop in his colon. Seems as though the ribbon was the only weird thing he ate. We’re supposed to watch for vomiting and anorexia (that means not eating, which would be VERY ODD for this Cheese). He’s already had Alpha Cat kibbles from the food puzzle and greeted his brothers heartily.

Now, Robin understands why Cheddar cried when he used the box on Sunday night and why he wasn’t particularly into going out to Thunderpaws or to work with her for the last few days. The vet said it would be hard to know how long ago he ate the ribbon because stuff twists around in the intestines.

Cheddar is a lucky little guy this time and really needs to stop eating junk off the floor. Also, Robin could stop leaving junk on the floor in the first place. She threw out everything that looked like a ribbon as soon as she figured out what was in the poop. 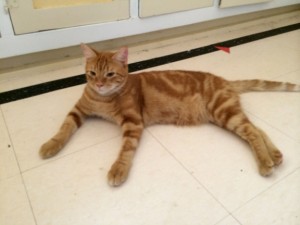 6 thoughts on “Cheddar goes to the vet.”