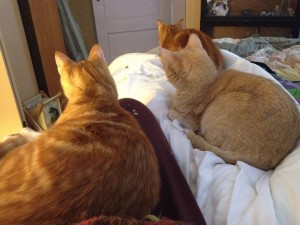 We’ve had a few cold days this week. That might not seem like news to our family Up North, but we’re SOUTHERN kitties. As much as we can, we stay in Robin’s bedroom when it’s cold. Although all of us (including Robin and U.H.) are pretty uncomfortable with the cold, this cold snap has given me an opportunity to get to know the Cheeses better. And I kind of like them. 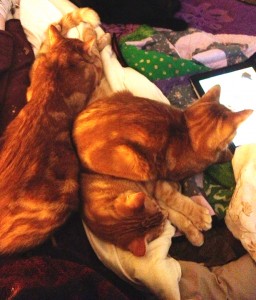 Robin joined us in her bed as much as she could. Of course, she had to go to her university because that’s how we get our kibbles. At least that’s what she tells us when she leaves. We almost got to have her home with us an extra day on Tuesday, but we didn’t have enough freezing rain to keep the students home.

The Cheeses took the opportunity of the cold snap to learn to paint on the iPad. At first they just watched the mousie on the screen, which meant Robin or U.H. had to be handy to start the app again when it went dark from lack of action. 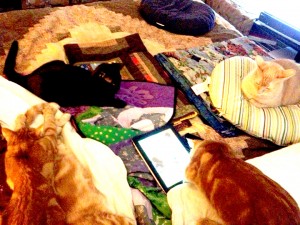 Once they figured out that they should whack the mousie to keep playing, they made great progress. Colby and Brie are the most interested in painting. Cheddar paints too, but Bleu usually watches, which is different for him.

Brie and Cheddar kept each other and Robin warm while Colby painted. Bleu and I watched. Becket and Reggie are a bit put off by the noises of the paint app and the Cheeses’ rambunctious painting style, so they found other warm spots to hang out. They had the bed to themselves during the cold nights.

4 thoughts on “Coping with the Cold Snap”