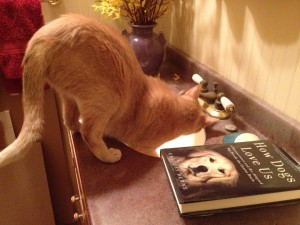 … and I’m having trouble keeping my present for Robin a secret because I need her help to turn on the faucet.

She’s getting this book, How Dogs Love Us that we read about in the New York Times. I can’t review it for you yet because we haven’t yet read it, but I can tell you what it’s about and why cats should be as interested in the story as dogs and humans would be.

The book presents some serious neuroscience research in the form of the history of Gregory Berns and his dog Callie’s work to study dogs’ brains with an fMRI (functional magnetic resonance imaging) machine. Callie had to learn to sit still in the big machine that closes in on the body and makes a lot of noise. She also had to recruit some other dogs to do the same thing because humans don’t believe anything until they see it a million times. In this case, they aren’t quite satisfied yet because they only have views of 12 dogs’ brains at work.

That’s one key thing about this research: the fMRI reveals information about what the brain is up to while the subject is ALIVE and remains alive. fMRI also helps connect indicators of brain activity with what the subject of the testing is doing. That’s how the research sheds like on the HOW question about dogs’ emotions.

As Dr. Berns points out in his New York Times article, “Dogs are People Too” (which we HAVE read already), humans and dogs are mammals and so are primates, and cats and a lot of other animals. If it turns out that dogs and humans have brains that function a lot alike, it stands to reason that the rest of us have similar brain functions. Robin says that this research is a great addition to a neuroscience of dogs’ emotions that has been going on for the past few decades but wasn’t taken completely seriously in the mainstream of science (See Jaak Panksepp’s Affective Neuroscience: The Foundations of Human and Animal Emotions for a very serious, scientific look at how mammal’s brains process emotions. Robin heard Dr. Panksepp speak this summer and has this book on her Wishlist at Amazon. Maybe we’ll get it for her birthday!)

I can’t think of a better thing for my human to do on Christmas than read a book about love. And cuddle with us kitties, of course.

2 thoughts on “Twas the Night Before Christmas…”