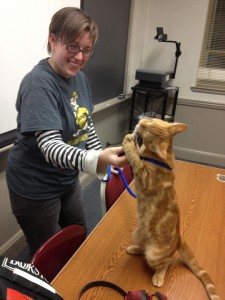 The Cheeses visited Robin’s class tonight, as planned. What Robin hadn’t planned was that Lexie and Karma would get in an argument and need a referee right before she and the boys left for campus. That was important because Robin had planned for the Cheeses to get to the classroom in time to get comfortable before the students arrived.

That did not happen.

Almost all of the students were in their seats already when Robin came in with the two carriers. She put the carriers down with the doors facing away from the students and let the kittens come out in their own time. The Cheeses were pretty nervous with all of those big people looking at them (I know I couldn’t have handled the pressure!). All except Cheddar.

Cheddar got up on the desk and found the chalk. He really liked the big piece of chalk. He also liked Rebecca. Rebecca walked around with him and tried to keep him from eating the chalk. Cheddar walked around, rolled on the floor, played with toys, let students pet his tummy, and even got comfortable enough to give himself a bath right there in the classroom. He’s a born educator. 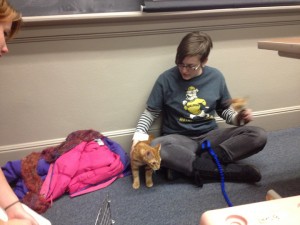 Colby came out, looked at the students, and went back in the carrier. Actually, he did that a number of times and then decided to stay out to play. By the time he decided the situation was ok, Robin had concluded that he was done for the night and had take his leash off. That shows you how much Robin understands Colby.

As soon as Colby was out of his leash he played with Rebecca and with Laura (not pictured) and Hope. Colby also burrowed in Robin’s pink and purple parka and ate a LOT of treats while he was at class.

Hope coaxed and coaxed, but Brie just didn’t want to come out of his carrier. Finally Robin insisted that Brie come out, just so he could see that nothing too awful would happen and maybe next time he would be more willing. She carried Brie around a little and then let him go back to the safety of his carrier.

Bleu came out of the carrier for awhile, but he was so surprised to find students in the room that he hid under the pink towel from the carrier. He was still outside of the carrier, but under the towel. Robin carried Bleu around a bit in the room as she talked about the work therapy animals do in hospitals, schools and assisted living centers, among other places.

U.H. went to the classroom to pick up the boys because this class period is WAY longer than any kitten should be expected to stay at school. When they got home, they spent more than an hour playing while they waited for Robin to get home. 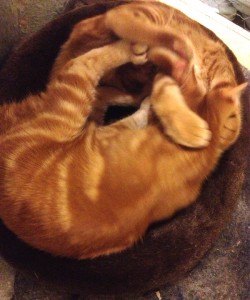 Once she was home the boys went in their room and had a big bowl of kibble. After that, they went to sleep.

Well, they may have played a little more, too.