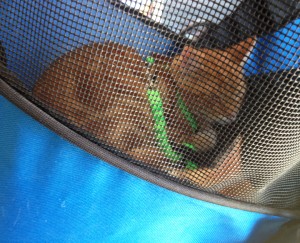 We have two good things to say about this so-called adventure.

1. Someone finally rode in the stroller.

2. Both of these Cheese boys are brave.

Robin told them that if they didn’t like being there, they only had to stay 15 minutes. We say she LIED TO THESE CHEESES. They stayed for more than an hour!

She took them in a carrier in the car and transferred them to the stroller, or buggy, as we prefer to call it. There were about 3 million dogs at the rescue area and 10 million more shopping. (Robin says the rescue had about 10 dogs and puppies, but the Cheeses said it sounded like millions, anyway.)

Robin took them to the back of the store to look at cat food and other cat products. They had an “Adopt Me” bandana on the buggy and a little description of the fine features these Cheeses have to offer a forever family, including that they want to stay together.

Robin parked the buggy near the in-store cat adoption area and TTouched the boys through the canvas. They relaxed a little bit while they were back there, but then she moved them back to the rescue area near the door for more people to see how lovely they are. Eventually, Colby ate some treats, but Brie never ate his. A few people thought it was cool that the boys wear harnesses and walk on leashes, but nobody wanted to adopt them.

We think it’s the full moon today messing with those humans’ minds. These are the cutest kittens ever on Earth. Whoever takes these Cheeses home will be the luckiest human ever (well, Robin might be luckier, but no one else could possibly beat her and these as-yet-unknown lucky people).

Some lady from another rescue told Robin she needed to have the Cheeses stay over at PetSmart in cages to make their transition to a new home easier. Robin thinks this is silly. If the lady had said it would help the Cheeses get exposure to potential adopters, Robin would have agreed. But she doesn’t see why making them uncomfortable in cages from time to time would prepare them for finding a home.They could just get really scared of all the people looking at them through glass. Besides, PetSmart is 15 miles away and Robin would want to visit them at least once a day. Besides, Bleu, Brie, Cheddar and Colby go on lots of adventures. They are glad to go out and glad to come home again. Going to a forever home will be just another adventure for the brave Cheeses.

And then they came home with fleas, which clinched the deal. No more adoption events at PetSmart for these Cheeses.

2 thoughts on “Adventure at the Adoption Event”