We big cats are not unified in our opinion of the Cheese Kittens, but I for one think they are nice, little boys. Last week they went in for neuter surgery, rabies shot, vaccination booster and microchip. That’s a lot for one day.

No wonder they were so tired!

They had anesthetic, which gave Robin great concerns. She needn’t have worried, however, because the boys did great at the vet and recuperated just fine. 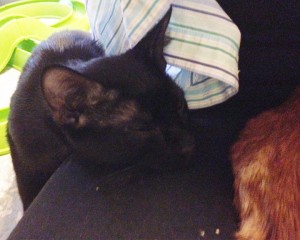 The vet said the kittens shouldn’t jump, not because of the surgery at all, but because they were so groggy. The Cheeses wobbled around their area for a few minutes — Bleu tried to walk past Robin, but had to rest his head on her for awhile on the way — and then they sacked out for several hours. Once they woke up, they were ready to eat a little, and to jump. Thank goodness it was night time, so Robin talked them into going back to sleep.

By morning, they were bright-eyed, but walking a little funny. 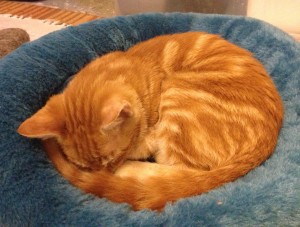 You’d never know anything about them was different now, but on Thursday they were very sleepy and cuddly. Robin went around singing, “Wake up sleepy cheeses, oh what can it mean to a day-dream believer….” (Yes, she watched “The Monkees” forever ago.)

She puts the Cheeses into every song that crosses her mind, really, and they are all old songs. Her favorite is to the tune of Elton John’s, “Levon.” That one’s a MUCH happier song in Robin’s version. “And Cheeses, they want to go to Venus, leaving no one else behind. Take a balloon and go sailing with everyone they love.” 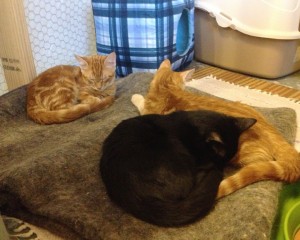 Robin’s Cheese versions of songs don’t always rhyme or make sense, but she likes them. And she likes taking care of the Cheeses.

We big kitties think they are cute enough, and we’re glad they give Robin smiles, but we’re wondering when their forever people are going to show up.