Buzzfeed put our state on the list of “Top Dog-Loving-Cat-Haters.” The only good thing about this is that Texas is not No. 1. Our state comes in fourth behind Louisiana, Alabama and Mississippi, like it does on a lot of other lists. Texas households are not quite twice as likely to have dogs than they are to have cats. (Buzzfeed got the data to make this list from the AVMA’s U.S. Pet Ownership and Demographics Sourcebook. I want to see the rest of the data, but Robin refuses to buy the report.)

Some states have a balance of dog and cat households, but the South is definitely into dogs. 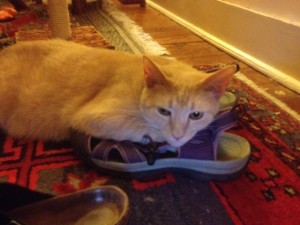 Although we don’t have dogs in our household, our human sure has some in her heart. I enjoy the shoes she wears to walk with her dog friends. 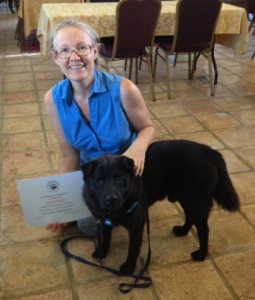 In fact, we all like these shoes very much and Robin had to move them out of Lexie’s territory because she didn’t want the rest of us coming in to share the smells.

Robin even takes her dog friend Jack to classes! She says her “dog class” is one of the best hours of her week.

That means that even though no dogs live in our house, Robin is a dog lover as well as a cat lover.

She says she has not invited dogs to live with her because she spends so much time at work that a dog would not have a very good life with her. We cats are a lot better at entertaining ourselves in non-destructive ways. Her love of dogs and lack of a dog in her house motivates her to help more with the rescue dogs. It’s a great way to live!