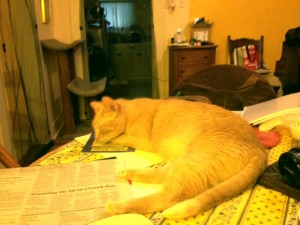 Robin and I had morning cuddles in the dining room again. I chose not to eat the fancy food out there, but I did eat the chicken-flavored yogurt that Meggy’s friend in Scotland sent to her. I just couldn’t resist!

I curled up in Robin’s lap but flung my tail all around the whole time. After that, I got up on the table. There’s a lovely pad there, just for me! When you look at the background of the picture (sorry about the color. Robin tried to fix it, but the room has yellow walls and she couldn’t add enough blue to balance), you can see the screens on the doors. Imagine running up and hitting your head on that black stuff! And it smells icky too. So when Reggie walked by the door, I didn’t bother to get up, just lifted my head and shouted a little. I was expecting to be ushered back into my room, but Robin ignored me. Reggie walked by again, and I just lifted my head a bit to look at him.

We stayed at the table while Robin ate her blueberries and read the paper (why do humans call it the paper when they read it on the iPad?) and The Dog Stars, which she says she’s reviewing for her new magazine (and that’s another story entirely). When we started to move around a bit after a couple of hours, I went over by the door to look for Reggie and found him! I yelled and he hissed and ran away!

I think I won today, but the game is not that exciting in the heat of summer. I would rather just stare at him.