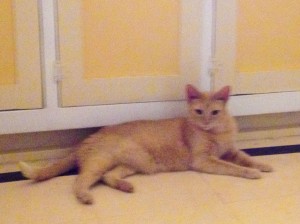 Today I chose not to engage with Reggie. I saw him, sat up very straight and looked at him through the screen.

Robin gave me a treat, and I ate it. And then I ate another one. Then Reggie came over to the screen…

And I had another treat.

And Reggie had some treats too.

Then, Meggy and Lexie had some treats with me and Karma had some with Reggie.

When I’d had as many treats as I wanted, I looked up at Reggie and walked into the kitchen to lie down.

4 thoughts on “A Week of Progress”