I have THREE fursibs who are black kitties: Becket, Belle and Reggie. Since August 17 is Black Cat Appreciation Day, I want to devote this post to them. 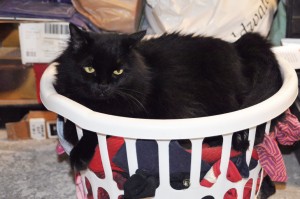 Belle is beautiful. Really beautiful. She mostly stays upstairs. Belle is UH’s kitty, and she doesn’t like Robin at all although she tolerates her when UH is not in the house. Everyone defers to Belle, even Reggie.

She does come down in the garage, which is where she is in this picture. Belle doesn’t much like being photographed, but she gets brushed every day, sometimes TWICE.

Belle and Becket are litter mates who came from a Siamese rescue up near Dallas a long time before I was born. UH drove up there to meet Siamese kitties and adopt one, but she picked Belle and Becket instead, because they are BLACK.

Becket is the biggest of us (just like he was back when I wrote my book). The rescue said the kitties were SISTERS. Yup, they thought Becket, who weighed 17 and a half pounds at his recent check-up, was a girl. UH was looking at the kitties a day or so after she brought them home and she noticed that this one didn’t look so much like he had girl parts. He had BOY PARTS!

When I was a kitten, Becket taught me everything I needed to know. Now, he mostly hangs out with Robin. He absolutely LOVES to eat, but he only eats certain things, such as his kibble, a spoonful of canned kitty food or, sometimes, yogurt. When Robin tries to give him treats, such as Greenies, Becket runs away! Actually, Belle doesn’t eat treats either. 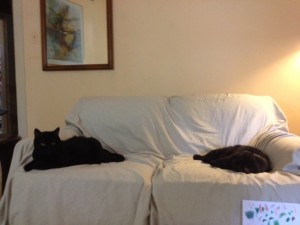 I don’t like Reggie, but Becket thinks he’s OK. Actually, they are pretty good buddies who spend a lot of time together.

Reggie is a lot smaller than Becket, but he is much LOUDER. Reggie came to eat here and was a Garden Kitty for a long time. When he came in, he hadn’t been neutered yet and the humans took him right away, but he still has a lot of the streetcat in him. (That’s why I don’t like him.)

Reggie makes sure Robin gets up early enough to give us breakfast when we like to have it. He TRIES to get her up between 4 and 5, which we would really like, but settles for 6. He kind-of panics if she sleeps past 6:15. Maybe I should get over disliking him because this is really a useful thing he does. 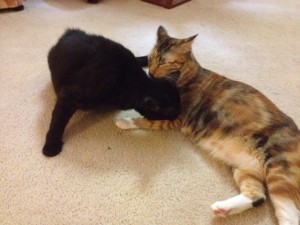 Reggie and Karma are pretty good friends. They play and chase. But his BEST relationship is with Nutmeggy. She just LOVES Reggie. He’s the only one she grooms on a regular basis. She will groom me sometimes, but she ALWAYS returns Reggie’s grooming.

Reggie also makes sure everyone gets treats at night. We all (except Belle because she doesn’t like it) get a little bit of canned food every night before bed. In fact, it’s about time for Robin to get up and feed us now. She also needs to do something about her laundry. MOL