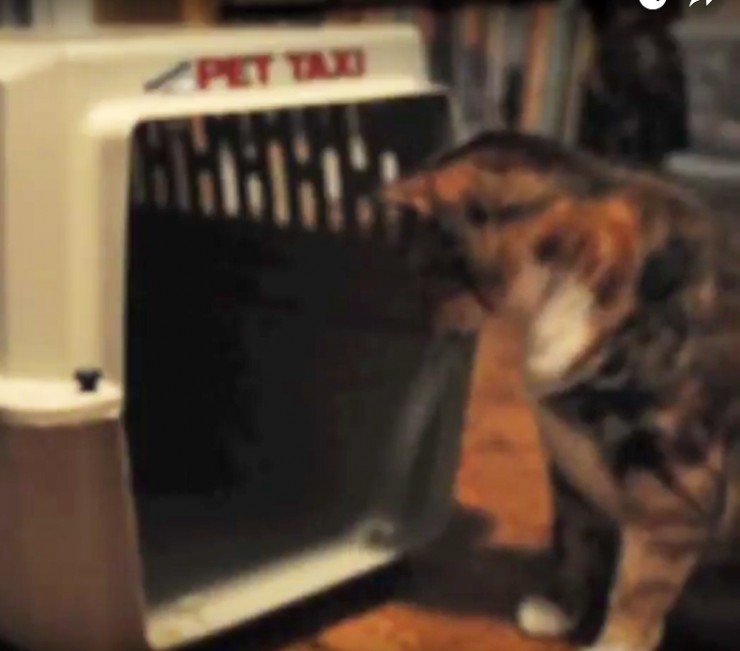 First, we needed to give Nutmeg a different experience with her carrier, one in which good things happened and no one left the house. The cats get treats pretty regularly in the bottom half of a hard-sided carrier, so at least we had that going for us.

I took the door off the carrier to avoid making scary sounds and took it out for about five minutes each of five days this week. (No training on the days I have a heavy schedule on campus.) I put the carrier down where Meggy eats, as eating is very important to her.

Day 1: When she sniffed the carrier anywhere, she got a click and a treat. (I use a quiet clicker because the louder ones scare the cats. You can also use your voice to mark when your kitty has done the behavior you’re looking for. Or a ballpoint pen….) She got her treat just inside the carrier. If she walked all the way in the carrier, she got a few more treats. At the end of the session, I put Karma’s leftover breakfast in the carrier. Nutmeg went in to eat it.

Day 2: We did the same thing, clicking for any action that got Nutmeg closer to walking in the carrier on her own. She rubbed around the opening a lot, and she also rubbed around the back of the carrier, which isn’t getting her closer to going in. I added a target for her, my finger inside the carrier. (Targeting is a behavior she is familiar with.) When she followed my finger in, I tossed a treat toward the back of the carrier. She had to go all the way in to get the treat. We did that a number of times. Again, she got to eat Karma’s leftovers in the carrier. Day 3 and 4 were essentially the same.

Day 5: Nutmeg was comfortable enough with the carrier that she would readily get in to eat treats and Karma’s leftovers from any direction. Meanwhile, I received my Acrocats training kit (my reinforcer for contributing to their fundraiser to buy a new bus!). The kit includes a distinctive whistle that Samantha Martin uses as a cue for the Acrocats troupe members to go to their carriers. I watched that chapter of the training DVD, and we set out to try the Acrocats training tip.

The whistle startled Meggy at first, but she got used to it fast. I started tossing the treats – we are using Alpha Cat kibbles from Natural Balance – to the back of the carrier after Karma got out. We did that quite a number of times. Nutmeg would stop and sit in the carrier sometimes. I targeted her out a few times, so I could send her back in.

What you don’t see in the second video because the camera battery ran out, is Nutmeg stretched out on her side, lounging quietly in the carrier. NOT SINGING.

Yes, Nutmeg spent about five minutes enjoying hanging out in the carrier, not singing. This is the longest she’s been in a carrier without starting to sing or shout. Ever.

Not bad for about a half an hour’s training over the course of a week!

4 thoughts on “Training Tuesday: Meggy and the crate make progress”