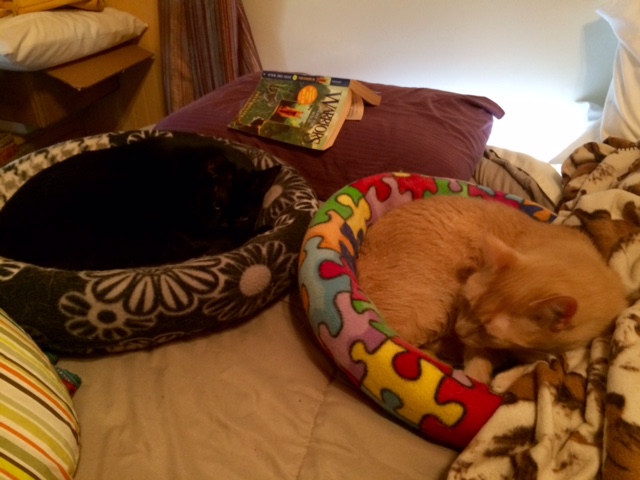 Most humans in a study published in the Proceedings of the Mayo Clinic report that sleeping with their pets in the bed or at least in the bedroom helps them sleep.

I could have told them that!

The study, “Are Pets in the Bedroom a Problem?” found that about half of the 150 humans surveyed sleep with at least one pet in the bed or in the bedroom. Of these, more than half find the arrangement pleasant or at least neutral. Only 20 percent found the presence of companion animals during the night disrupted their sleep.

Humans who sleep “alone,” as the researchers put it, are more likely to enjoy the company of pets while sleeping. Of course, if cats and dogs are around, the human isn’t really alone, right? Some humans take in a cat or dog to help them relax. Some feel safer with pets in the room with them while they sleep. Some want us around for warmth (isn’t that what they say cats want from humans, too?)

The study surveyed people who were patients at the Mayo Clinic’s, Center for Sleep Medicine, so they might have specific considerations that wouldn’t apply to other humans. Also, 150 isn’t a very large number of humans, so these findings should be examined further. The researchers think humans may under-report sleep disturbances caused by beloved animal companions. (Like Reggie yelling at night around here for the past couple of weeks after he slipped outside and spent a night on the streets. Idiot.)

We have an ENORMOUS bed that has room for a lot of us, and Robin likes us to be with her. She says having us sleep with her is her favorite thing about winter.

About the picture: That’s Bleu and me in beds Robin made (like the beds you could buy!). We have beds, blankets and pillows on the big bed and a nice big, rectangular bed in the window. I’ll show you the big bed another day.

4 thoughts on “When Animals Sleep With Humans”