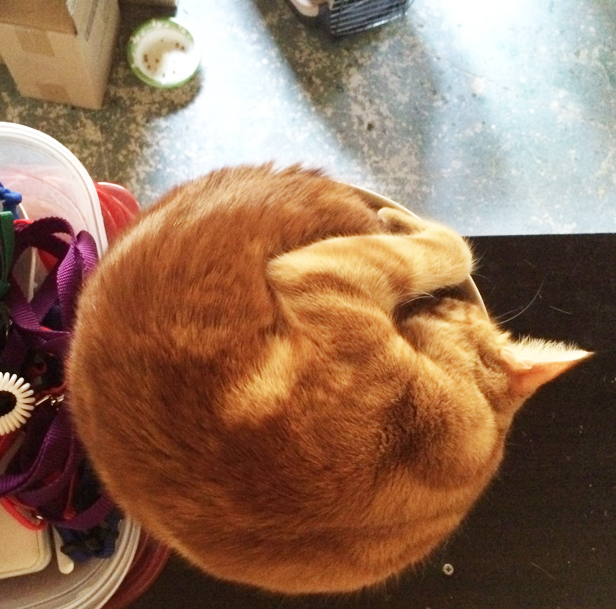 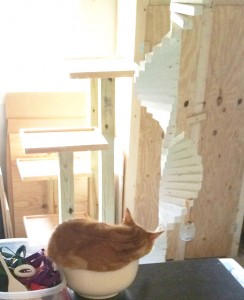 Cheddar and Bleu and Robin worked on their big project today. Robin’s curriculum for these two Cheeses right now aims at learning to dial an emergency number on a phone. They started with “shake,” added a horizontal touch on Robin’s hand, and now they are learning that they can “press” something other than her palm. After they get this, they’ll work on pressing lots of things, including the speed dial button on a phone. Robin says she will get them a phone with a big, red 911 button, like this one.

Robin puts an object in her palm, then asks the kitties to “press.” When they touch her palm and the object, they get a click and a treat. They move on to pressing the object that is in her hand but not pressing her hand. Click, treat. Bleu figured out the other day that “press” wasn’t just for Robin’s hand. He touched both, got a treat. Next time, he touched just the object with his dominant paw and got a treat. After that, he touched just the object with his other paw, and got a treat. Next, he pressed the object (a pink Post-It note pad) with confidence. He got extra treats for that! Robin loves to see the kitties think and experiment while they are learning what she would like them to do.

Bleu is ahead of Cheddar in his mastery of the concept of “press,” although Cheddar has been working hard enough to tire himself right out. You see, Cheddar also has to learn to stay in his own spot and to take turns. He is not good at either of these things. Cheddar likes to be in the center of the action.

Bleu and Cheddar go to their own mats. Robin alternates one “press” at a time. Cheddar only tried to get on Bleu’s mat twice. Robin asked Cheddar to return to his mat. She asked him to “shake” once he got there. Then he got a treat. She doesn’t want him to think he gets treats for popping over to Bleu’s mat and going back to his own!

Both Cheeses earned their afternoon naps. Bleu took his on the bin where the quinoa is stored. Robin had to delay starting dinner till he got up.

Cheddar slept in a bowl.

2 thoughts on “Sunday Training and Naps”