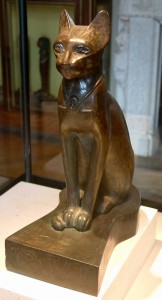 Robin and U.H. spent a few hours in Austin today to look at an art exhibit called In the Company of Cats and Dogs at the Blanton Museum of Art. The exhibit spanned human history from Bast to Henri.

The first part of the exhibit introduced the ancient view of dogs helping humans deal with death and cats providing protection for the human’s food. The works came from Egypt, Greece, Rome, Asia and Mesoamerica. Next came myth and religion, which was mostly art from medieval Christian culture. Boy, did they not trust us cats! Dogs came off a bit better but not too much. The text of the exhibit states cats are not mentioned in the Bible at all. Dogs are mentioned a few dozen times, “only one of them kindly.”

Two rooms look at dogs and cats hunting and one presents ethical issues about hunting with dogs. Robin was especially drawn to a painting of otterhounds by John Sargent Noble. Luckily, just the dogs in the landscape. One dog is just about to shake, which Robin thought was cool. A section on herding also featured working dogs.

Scenes of abandonment were featured in one section. Another dealt with aggression, mostly of dogs both for protection of their people and otherwise. Morality was another theme. Robin particularly enjoyed a photo of a white cat in the window of a lingerie shop in France by Henri Cartier-Bresson and a Japanese geisha snuggling with her cat.

Another section of the exhibit presented domestic scenes. Lots of lap dogs, as you might imagine when the exhibit drew on a collection that favors European art up to 1900. A huge painting presented Cinderella and her cat on the hearth in the foreground while the evil stepsisters got all gussied up in the distance.

In the room for kids to be actively engaged with the art, they had some of the panels from Boogie the Boston terrier trying to teach humans how to speak dog, some paper for kids to draw and a couple of great quotes. The quote from Milan Kundera in the photograph of the wall shows that dogs have changed position from guides to the underworld in ancient times to helping humans remember what it was like before they got thrown out of paradise (if you believe the Christian stories).

On another wall they quoted Albert Schweitzer saying “There are two means of refuge from the madness of life, music and cats.”

Robin missed some pictures in one room because she was overwhelmed by a huge painting of a cowboy. She couldn’t even tell us if the cowboy was with a dog or a cat. I suspect a dog!

The museum human showed some cool cat videos, including Henri and Nora as well as Japanese cats with fruit and flowers on their heads. U.H. thought one of the kitties in that video looked like a Cheese.

Sadly, Robin was counting on buying a catalog of the exhibit but found out in the gift shop that the museum didn’t make one for this show. (This means she will likely be going back before “Cats and Dogs” closes on Sept. 21!) She did find some neat toys for kids, dogs and cats in the shop. She brought one home for us, and tomorrow I’ll show you video of the Cheeses and the new toy. I guarantee you’ll laugh!

This isn’t the same ancient Egyptian statue of Bast that Robin saw. This one was photographed by Guillaume Blanchard (Guillaume Blanchard) [CC-BY-SA-1.0 (http://creativecommons.org/licenses/by-sa/1.0)], via Wikimedia Commons