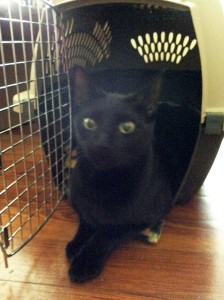 The Cheeses went to meet our wonderful veterinarian today. (I know, I know, how can I think a veterinarian is wonderful? Remember… she did our exam sitting under the examining table last year! How can I not love her?)

All four Cheeses went in two carriers. Brie and Bleu rode together, and Cheddar and Colby rode together. U.H. went along too, but she didn’t have to go in a carrier, just the car with Robin.

Dr. Gowens said the boys were in good shape and that Robin is doing a good job with all of us kitties. Cheddar’s paw looks fine after the antibiotics he took. He weighs 10.2 pounds, and had most of the checks he needs to be a therapy cat volunteer. 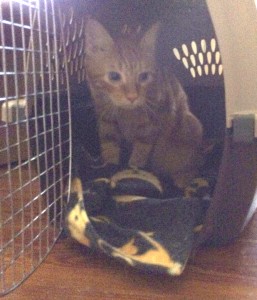 Colby weighs 9.7 pounds. He’s the littlest. He has gingivitis around one tooth. That could explain why he eats slowly. Robin has found that Colby likes the kibbles the Garden Kitties eat and having more kibbles may help his gums.

Brie is the biggest at 13.9 pounds. Dr. Gowens checked his hips because the humans have been a bit concerned about the way he walks and doesn’t jump much. She says Brie’s range of motion is within the normal range and his legs move smoothly. I guess he just doesn’t like jumping. His body condition rated a 7 out of 9, which means he’s a bit chubby, but still good.

Bleu had the most fun at the vet. He explored all over the office. Mostly, he was interested in a hole for the computer cords. The vet techs told the humans that the farthest he could get was examining room two, but U.H. sat on the floor and blocked the hole with her head. MOL! Blue weighs 12.7 pounds and is very healthy. He purred through his whole exam. (Of course, he was purring to calm himself, not because he was happy.) Dr. Gowens and the vet techs noticed that Bleu is really smart!

Brie tried to go through the hole too. For a moment, he was hanging from it by one claw. U.H. held him up while Robin unhooked his claw. 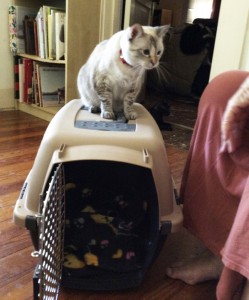 All of the Cheeses had some vaccinations, but only Cheddar had the test for feline leukemia. The other Cheeses didn’t have to have the test because they are litter mates, their mom tested negative,  and they haven’t been exposed to the virus.

Colby was the only Cheese who sang, and only a little bit.

When the Cheeses got home, everyone got some really good treats….. in the carriers.

Some of us posed for pictures when the Cheeses got home. Bleu, Cheddar and Brie went back in the carriers for treats. Lexi got on top of the carrier but didn’t go anywhere.