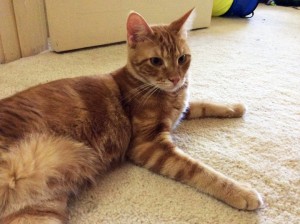 Colby was the quiet one when the Cheeses were little. He was he most fearful of the four. Now that he’s been through socialization with food cooking on the stove (he used to run out of the room) and the television (he fled to a safe place), he is developing into a fine, social kitty. 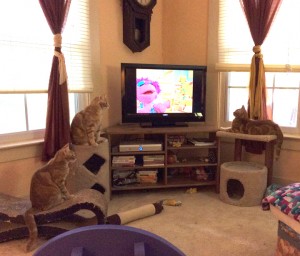 Colby usually comes a little late for dinner although he doesn’t seem so concerned right now that his brothers will step on him. He now spends time in the kitchen and watches TV with the humans. 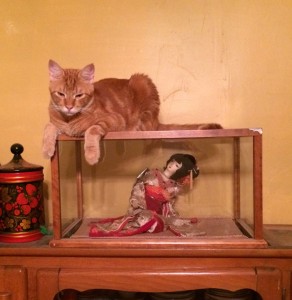 He loves most of all to play with feathers. He surpassed himself in climbing to get the feather toy off the dish cabinet in the dining room. While Colby was up there, he discovered the Japanese doll Robin inherited from her grandmother. (Grandpa John brought the doll all the way from Japan when he was in the air force a long, long time ago.) We are not allowed to touch the doll, for OBVIOUS reasons.

Colby keeps a respectful distance, unlike the other Cheeses, so I do prefer his company when I’m in the mood for kittens.

Colby is also the only one of the Cheeses to have a human best friend who comes to visit him almost every week. (She will play with any of us, but Colby has the most fun with her!)

Cuddle Family members who got this update by email can click on the title of the post to go to my website and see a video of Colby playing. It’s worth it, I tell you!

2 thoughts on “Profile of Colby Cheese”