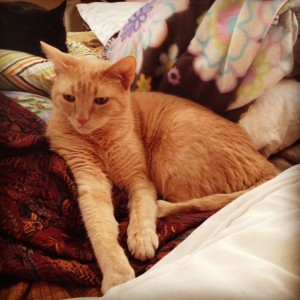 Robin has been working hard and hasn’t been available to help me post for a couple of weeks. I apologize for that! One of the things she was working on was the talk for her university’s chapel service today.

She talked about a story of the relationship between St. Paul and a lion. The congregation got to sing “The Lion Sleeps Tonight” (Robin likes this version with Billy Joel and Jimmy Fallon, but they weren’t available and the chapel band did a great job!). Everyone also had a chance to meet her friend Diesel, who is a therapy dog. Diesel and Chris, his person, sat in the front row, and Diesel chimed in occasionally with the talk.

This is what she said:

Shortly after St. Paul’s conversion, one of the stories in the apocryphal Acts of Paul tells us, Paul and his traveling companions were deep in prayer when an enormous lion approached the group. After Paul had finished praying, the lion bowed down at his feet. A 4th century manuscript of the story tells us Paul asked, “Lion, what do you want?” The lion answered, “I want to be baptized.” Paul then led the lion to a nearby river while his companions continued praying. At the bank of the river, Paul addressed God and asked, the story says, that “we accomplish the plan which you have appointed.” He then took the lion by the mane and immersed him in the river. The lion emerged from the water, shook himself off and said to Paul, “Grace be with you.” Paul replied, “And also with you.” The lion rejoiced and ran off into the country. [NOTE: quotes from published translations of the text appear in bold.]

Some time later,  according to another manuscript of the Apocryphal Acts of Paul, discovered in the 1930s, Hieronymus, the governor of Ephesus, responded to complaints against Paul with a sentence to punishment ad bestiam, that is, that Paul fight the beasts, in particular, an extraordinarily large and fearsome lion that had been captured recently. The story continues:

After six days Hieronymus made a display of animals: all who saw it were astonished at the size of the beasts. While Paul was bound … he began to pray …he heard the noise of the wagons … that carried the beasts…

And when the lion came to the side door of the stadium where Paul was imprisoned it roared loudly, so that everybody cried out, ‘The lion!’ for it roared fiercely and angrily, so that even Paul broke off his prayer in terror.

At dawn there was a cry from the citizens, ‘Let us go to the spectacle! Come, let us see the man who possesses God fighting with the beasts!’

[Paul] was dragged in, saying nothing, but bowed down and groaning because he was led in triumph by the city.

[The authorities] then ordered a very fierce lion which had but recently been captured to be set loose against him.

But the lion looked at Paul, and Paul at the lion. Then Paul recognized that this was the lion which had come and been baptized. And borne along by faith Paul said, ‘Lion, was it you whom I baptized?’ And the lion in answer said to Paul, ‘Yes.’ Paul spoke to it again and said, ‘And how were you captured?’ The lion said with its own voice, ‘Just as you were, Paul.’ After Hieronymus had sent many beasts so that Paul might be slain, and archers that the lion too might be killed, a violent and exceedingly heavy hail-storm fell from heaven, although the sky was clear: many died and all the rest took to flight. But it did not touch Paul or the lion although the other beasts perished under the weight of the hail…

St Paul was able to leave Ephesus on a ship along with other Christians who were fleeing while the lion vanished into the mountains beyond the city.

This story is one of a number of stories about lions and other animals that are told in the apocryphal Acts of the Apostles, several books written during the first few centuries after the death of Christ. In this period, philosophers of numerous traditions wrote frequently about animals both for entertainment and to explore the status of animals in relation to humans. As in other traditions, animals figure prominently in numerous stories told by Christians in the apocrypha. The stories feature dozens of animals of dozens of species doing both ordinary and extraordinary things. Some kill Christians in stadiums. Some refuse to kill Christians. Some animals die themselves to protect Christians. While these stories were not included among the texts that became the canon of the New Testament, they may still offer us spiritual guidance today.

What did the story of St Paul and the baptized lion mean to early Christians?

In Animals in the Apocryphal Acts of the Apostles, scholar Janet E. Spittler suggests that sometimes early Christians told stories about lions just for fun. Just as we included a song about a lion in chapel today! Talking animals are entertaining in any era, just look at the Disney and Pixar filmographies and I can’t wait to see The Lion King at the Majestic at Christmas time!!!

Spittler also suggests that this story in particular connected Christians to the cultural heritage of the Roman Empire by transferring the story of Androcles and the Lion into early Christian terms. At this level, this story, and a number of others about human relationships with lions, become “edutainment,” according to Spittler , and convey to Christians that humans and animals can be friends and live in harmony in the kingdom of God. The stories provide models of kindness to animals and of animals as intelligent beings with feelings and spiritual lives. That the writer of the story we heard today made sure that St. Paul asked to fulfill the will of God in baptizing the lion, thus also conveys to his followers that animals are welcomed and protected by the same God who embraces Christians.

That’s an important point for large cats and other animals living in the Roman Empire, as millions of such animals were slaughtered for sport and pageantry in this period, along with the Christians whose punishment was to fight the “beasts.”

This is an important point for modern Christians who hear this story as well. In her study The Friends We Keep, scholar Laura Hobgood-Oster stresses the common plight of great beasts and Christians in the Roman era to foster the development of empathy for animals in our own era, when dog fighting, horse racing and sport hunting remain popular passtimes.  Hobgood-Oster asks her readers to remember that Christians fought in the arenas like “bait dogs” of the Roman era. She hopes our compassion for animals who are used for sport — race horses, fighting dogs and those who are hunted as trophies — will deepen through connecting their lives to those of the martyred Christians we venerate because they lost their lives in the blood sports enjoyed by Roman crowds.

The story of St. Paul and the baptized lion may have yet another meaning when we look at it from St. Paul’s perspective and imagine ourselves in his shoes.  Note that the lion is enormous and fierce. Besides that, the lion was speaking like a human, which is unusual, Disney movies and Broadway shows notwithstanding. Paul must have been afraid when such a ferocious creature approached him. I imagine him swallowing and taking a deep breath, like I do when I face something that makes me want to run the other way.

St. Paul didn’t try to flee or fight. Rather, he entered into conversation with the lion. He trusted God and believed the lion had a sincere intention to share the spiritual life of Christians. Putting aside the expectation of ferocity, he trusted that he would be safe, and he baptized the lion.

Paul’s trust in god – and the lion’s for that matter – can serve as a model for any of us when we must do something we are afraid to do.

You, too, may be asked to baptize a lion. Yours may not have a mane, but it may roar ferociously. Take a deep breath. Trust. Immerse yourself in the river with the lion.

One day, your baptized lion may save your life.

Photo credit: We found the photo of the lion on Flickr.com. It was published by kjunstorm with a Creative Commons license.

4 thoughts on “St. Paul and the Baptized Lion”