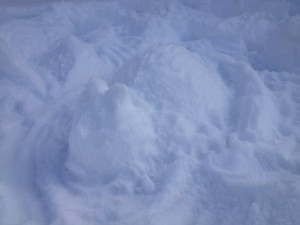 Robin has been visiting her brother for his birthday, as I mentioned. I have to confess that she didn’t actually do what I said she did for his birthday. There’s a simple reason why: the polar vortex.

Robin was actually still in Texas when I claimed she had hung 50 flamingos at her brother’s house. She left a day late but missed only about half of the birthday. She did hang the 50 flamingos in the hotel room while her family was eating the birthday feast downstairs. Uncle Chris found the flamingos after dinner instead of when he first got up. They said it was lots of fun to have everybody look at the flamingos and read the quotes on the back.

Just now, Robin made a snow kitty. The temperature is 18 F and the snow won’t pack, but I think she did a pretty good job making a kitty.

One thought on “Polar Vortex Generates A Snow Kitty”