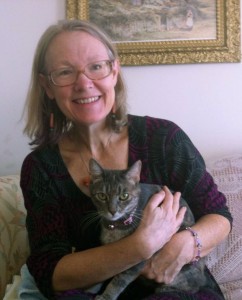 Robin met Princess Izzy, the mother of the Cheese Kittens, in person on Thanksgiving Day. She also met Miss Donna and her mom and had a lovely visit with them. 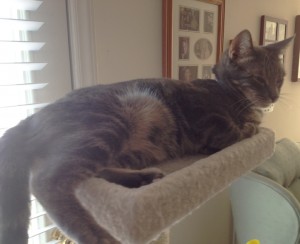 You can’t actually tell from the pictures, but Izzy is a torby, like Nutmeggy.

Izzy’s colors aren’t as bright as Meggy’s; they are called “dilute.” Where Meggy is black, Izzy is gray. Meggy’s orange is bright, whereas Izzy’s is peach. Meggy has white accents, and Izzy’s are cream. Whorls dominate both kitties’ tabby patterns too. Izzy’s are faint and don’t show up well in pictures.

Izzy likes to look out the windows where she and the Cheeses used to play. Robin looked out the window with Miss Izzy. She saw some bugs out there but nothing else. 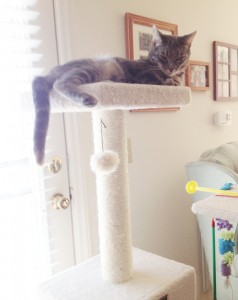 Izzy’s cat tree is just like the one her sons have at our house.

Robin got to meet Princess Izzy and Miss Donna because she had Thanksgiving at her cousin’s house. Her cousin just bought a nice house where a kitty named Mittens lived. Mittens stayed on (we don’t have a picture of Mittens, unfortunately), and a poodle moved in as well. 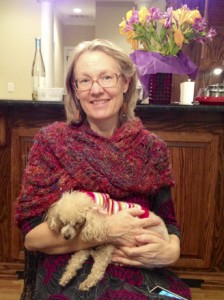 The poodle is Koko, who is 13 years old and really took a liking to Robin.