We sent our human off to Pflugerville to learn about Tellington TTouch with dogs. She told us that if we want her to share TTouch with us, she had to spend a week at a place called Dog Boy’s Dog Ranch. We agree with some skepticism. 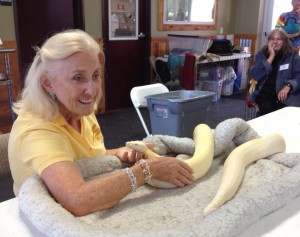 She sent us some pictures, and now we are all really wondering what she’s up to.

Yes, Ms. Linda Tellington-Jones showed the class of about 30 people the effect of TTouch on some snakes. (She has worked on just about every animal you can imagine.) This snow boa seemed very happy with the TTouch.

The snakes are pretty friendly, Robin said, and smooth, cool and shiny. 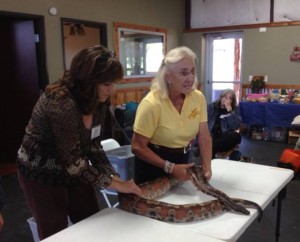 Yes, she did touch both the snow boa and the blood python (pictured here with Ms. Tellington-Jones and one of Robin’s classmates). The python weighs about 30 pounds, She was a bit surprised how pleasant she considered touching snakes.

She’s also enjoying sharing with a greyhound named Malika and all the other dogs and humans. She’s really inspired by Ms. Tellington-Jones. The training is connecting with her head and heart. Ms. T-J has learned so much and shares generously her techniques and stories.

Now, Robin wants to TTouch a rhino. I think she should practice on cats, first.