Half of all pet cats are overweight or obese (as we learned in part 1 of this conversation), and our family is no exception. Everybody in the house (except me) eats weight control food. Becket has never had an “off switch” for eating, and Nutmeggy is pretty much the same. Belle is overweight, too, but she doesn’t really overeat. Reggie eats the special food because his tummy gets upset. Karma gets the same food the others do because she won’t defend her dish, and the others take her food. I eat in another place and am not overweight, so I get a formula blended for indoor cats.

Cats gain weight because we eat too much and don’t exercise enough. Of course, that’s exacerbated by the hormonal and metabolic changes that happen when we’re spayed or neutered.

Humans can present a challenge to kitty weight control.  “Over the course of time the cats train us to be a food dispenser,” Steve Dale said.

Humans often leave food out all the time for us, and we start to gain weight. As Mr. Dale says, a three-pound weight gain in a year can be a lot if you only weigh 9 or 10 pounds to begin with! It’s really important to go to your vet and let the vet weigh you. We visit our vet at least once a year and getting weighed is part of the exam. “Vets can’t talk about what they’re not seeing,” Mr. Dale said. (And as we learned in part 2 of the conversation, overweight can lead to serious health problems for us cats.)

When food is around all the time, a lot of cats will overeat out of boredom. “They don’t have anything else to do,” said Mr. Dale. “They do what they can – get the easy food! It smells good!”

Mr. Dale continued, “We assume [cats] have a self regulating control. They don’t.”

The first step toward a healthy weight, then, is to stop leaving food out all the time. Instead of free feeding, our humans should give us distinct meals at least twice a day. It’s even better if we can have three or four smaller meals. At our house, we usually get four small meals because one of our humans is almost always at home. If yours aren’t around, they can give you breakfast before they leave and dinner when they get home!

We cats also need some interesting things to do around the house, Mr. Dale said. The thing is that we usually don’t have much that’s challenging to think about, so we eat. The cool thing is that humans can give us our food in ways that help stimulate our minds!

The easiest way is to give us the opportunity to hunt for about 15 percent of our regular daily food. Mr. Dale suggested hiding food around the house. He suggested hiding in easy places first, not too far away from where we usually eat. We activate our prey drive by hunting for the food, and that’s good for a cat’s mind too! 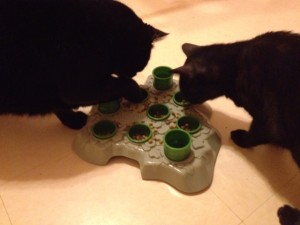 We also have some food puzzles. Two of them are balls that we play with to get treats out. We don’t like either one of them very much, but you might like them. We DO like the Stimulo Cat Feeding Station and Activity Center.

This puzzle uses cups that our faces won’t fit in, so we have to use our paws to get the food out. No one has advanced past the training cups, but we do eat more slowly.

Sometimes, Robin gives us part of our meal in the toy, which is OK, but not that satisfying. It’s more fun when we have a “treat” in the toy! (I don’t know if that’s going to help us keep fit…)

I have some dog puzzles Robin borrowed from Thunderpaws, and have fun finding my training kibbles under little plastic bone shapes with a hole in the top. I pick which bone has the food and then figure out how to get the food out. Usually, I push the bone along the floor and the food is left behind. If the food smells really good, I knock the bone over. Robin thought the dog puzzles were too heavy for me to move, but then it turned out that I can open a door with a rock and a stool behind it. If Reggie were inside the dog puzzle, I would surely try harder.

Speaking of keeping cats’ minds active,  training, or learning to do things, will also activate our minds. Thinking about what we’re learning gives us something to do rather than think about food. As you know, I really like my training practice. You might like learning to do stuff with your human too!

Mr. Dale says that small humans can be especially helpful in playing with us cats and making our lives more interesting. I’m not so sure about that, but then, I’ve never met a small human.

We can also benefit from more exercise, like playing with interactive toys with our humans a couple of times a day. The physical exercise will change our metabolism to help us burn off the food we do eat. 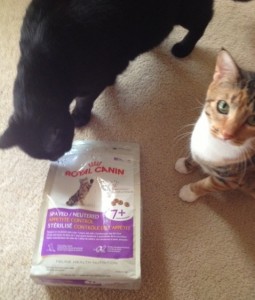 Another possibility for changing our metabolism might be switching to a new food. Mr. Dale told us that European humans have been trying new recipes for cat food to help us deal with the changes that come with getting spayed or neutered. Royal Canin introduced the same idea in the United States this summer, and we are testing it now! (Note that SOMEONE got a little overeager with this bag and tried to open it without human assistance.) 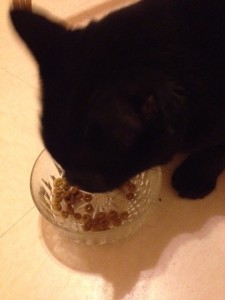 “This diet helps the cat to feel fuller!” Mr. Dale told us.

The ingredients in the food are balanced for kitties who are spayed and neutered. The shape of the food is specially designed to get us to chew slowly, rather than just sucking in our kibbles. Robin says the kibbles look like Cheerios or tiny doughnuts.

Spayed/Neutered dry food is specially formulated for four different ages: kitten, adult, over 7 and over 12. Although I can’t find references to the new food on Royal Canin’s website, the company does have a Facebook page and a video for Spayed/Neutered.

Meggy, Reggie and Karma are tasting the adult version. They all like it at least as much as their regular food. Karma hardly ever eats a whole bowl of food, and she ALWAYS eats her Spayed/Neutered. Becket likes the version for 7+ kitties. Becket is still trying to get more food all the time, but he hasn’t been eating Spayed/Neutered for very long.

If you are always feeling hungry and asking for more food (some humans call this “begging”), you should consider Spayed/Neutered. Make sure to ask your vet about making a big food change!

Disclosure of Material Connection: I received Royal Canin Spayed/Neutered cat food mentioned above for free in the hope that I would mention it on my blog. Regardless, I only recommend products or services I use personally and believe will be good for my readers. I am disclosing this in accordance with the Federal Trade Commission’s 16 CFR, Part 255: “Guides Concerning the Use of Endorsements and Testimonials in Advertising.”

3 thoughts on “A Conversation about Fat Cats: Part 3”