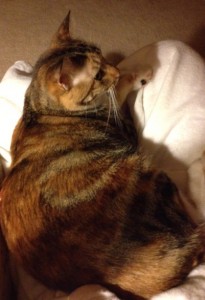 My human and I had a long conversation about fat cats with one of the big names in feline behavior the other day. We learned so much talking to Steve Dale, of Steve Dale’s Pet World and Tribune Media Services, who knows the most about cats of anyone we’ve ever talked to, and had a great time too!

If you want to learn about research about cats and new developments that can help us cats have a better life and live harmoniously with our humans, Steve Dale is the man to talk to! He’s a companion animal behavior consultant with an impressive list of writing and speaking credits. Most important to us, he takes action on behalf of cats with the Winn Feline Foundation, CATalyst Council and other organizations.

He is helping to promote research on hypertrophic cardiomyopathy. Niki, the cat of my human’s heart (before me!) had HCM. In fact, Miss Niki asked me to give Robin someone else to think about because she had to go to the RB the summer I turned up under the house. I have done that REALLY well.

Mostly, Mr. Dale believes in us kitties. His cats all learn to do things, and he wasn’t surprised that I am learning too. (For the record, he likes dogs too.)

But back to fat cats. I have to say up front that Mr. Dale didn’t say the f-word. I did, and Nutmeggy swatted me too! She says she is NOT fat and simply enjoys eating. Mr. Dale, being a believer in sound veterinary and behavioral research talked about overweight and obesity and some of the reasons we kitties get into trouble with our weight.

Obesity in domestic cats is an epidemic, according to Mr. Dale. HALF of all owned cats are overweight or obese! Humans don’t really know how to recognize a healthy physique in a house cat and think those of us who are physically fit are too skinny.

Some of the reasons kitties are overweight are the result of changes in cat care that are good for us. For one thing, staying inside keeps us safe, but it means we are less active. Another big part of the kitty battle of the bulge has to do with hormonal changes from spaying or neutering.

Mr. Dale told us that about 85 percent of pet cats are spayed or neutered now. This is GOOD because we need to stop exponential growth of the feline population. However, neutering can have consequences for our weight.

“Until recently,” Mr. Dale said, “We would know in our hearts that overweight was related to spay-neuter, but we didn’t want to say anything.”

Humans now have more science to document the causes of weight gain after spay or neuter. They are willing to take the risk to speak out about the possible consequences because spay/neuter has really caught on among cat guardians, with about 90 percent of them making sure their cats are not caught in the reproductive cycle.

How does getting spayed or neutered lead to overweight? Our hormone balance changes after the operation and we become HUNGRIER! At the same time, our metabolism changes and we don’t burn off the calories from our food as well as we could. Then POOF! We get fatter.

In tomorrow’s post, we’ll talk about why Mr. Dale says we all need to tell our humans to take steps to help us avoid gaining weight.

5 thoughts on “A Conversation about Fat Cats: Part 1”