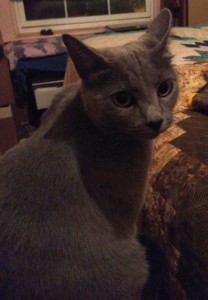 UH stood at the door watching our friend mouthing off along with the neighbor’s barking dog, and she didn’t even notice that Karma had slipped past her. Robin caught a glimpse of Karma’s little gray tail as it slipped through the opening and vanished under the house, or no one would have noticed that she left.

She kind of disappeared under the house, rather than running through and coming out on the other side, as Robin expected. Robin called for her and turned the light on under the house (I know, isn’t that cool? We have a light switch for a light underneath our house!), but no Karma.

UH looked for her from the other side. No Karma.

Robin finally left for the grocery store because that was where she was going anyway, and she figured Karma wasn’t going to surface any faster if she hung around wringing her hands and worrying.

UH waited outside, and the Garden Kitties tried to help. Huckie and Sparkle sat by UH and looked under the house. PC headed right under there to find her. No luck.

Finally, when everyone’s back was turned and Robin was away at H-E-B, Karma sneaked out. UH saw her and called to her, but that only made Karma take a long, circuitous path that went alongside the shed where the Garden Kitties eat. She decided to stop in there but thought twice when someone hissed loud enough that UH heard it all the way over by the house!

Karma skedaddled away from the shed door and ran to UH. UH picked that girl up and hugged her. She said in a really nice voice, “Please, don’t do that again,” and carried Karma into the house.

UH came right back out to find out who was HISSING from the shed because Huck, Sparkle and PC were all with her and Mystery spent the day in his bed in the Kritter Kondo.

It was an opossum in the shed!

Meanwhile, I was out and about in the house with everybody else from 1:30 – 6:30 and didn’t get into any fights or shouting matches.