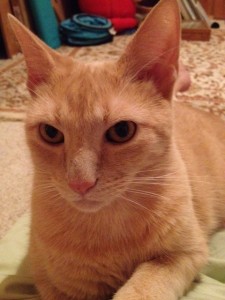 Cheshire and I started training while I was taking my first basic dog manners class with Tiko. Tiko was timid and a little scared of the clicker that I got from Thunderpaws, so I bought a quiet clicker for him. I had been hesitating to try training the cats with the standard clicker because I thought the regular clicker would startle them. With the quieter clicker, that barrier evaporated.

I started training Cheshire the same way we started with the dogs in my class, with loading the clicker. I chose some treats from our vast selection, clicked and gave Cheshire a treat. Click, treat, click, treat, we continued until he recognized that the sound of the click meant a treat was coming. Next, we used the clicker to mark a look at me when I said his name. Getting his attention was a prerequisite to all additional learning.

When we moved into learning behaviors, I learned how important it is to use small training treats. If the treat was too large, Cheshire would have to stop everything and chew it. When I went to BlogPaws, I got samples of Natural Balance Ultra and Alpha dry cat foods. These have become our staple training treat. We train first thing in the morning, and he usually puts off eating his breakfast to have his training treats first.

He learned “sit” first. We used the same technique that we used with the dogs in class. I held the kibble, oops, the treat, a little above his nose and moved it up and back. Cheshire sat down as he tried to get his head in place to eat the treat. His bottom touched the floor: I clicked and gave him a treat. We repeated this.

Ron Gaunt, the founder of K9 Nose Work, told me that conveying to your animal trainee that you want him to learn is the biggest hurdle in training. In the first few sessions, Cheshire was puzzled by our new activity, and he tested me to figure out what the heck I was up to. In no time, probably a couple of days, he had decided he liked our training sessions. He would approach, try some behavior, get some treats, and retreat a little way away from me, where he would process the information he had acquired. Approach and retreat. Test and analyze results.  His interest in learning grew as he experienced success by offering behaviors and getting the rewards he wanted.

I was ELATED that the clicker training was actually WORKING.

We moved on to learn “down.” With the kitty in “sit,” I held the treat near his nose, dropped it down toward the floor and moved it a little forward to show him the direction of movement that I wanted him to try. Meanwhile, Tiko was resisting the “down” command in dog manners class, so I was prepared when Cheshire hesitated a bit. He has learned down, but he doesn’t particularly like it. You might have noticed his hesitation in the video. He almost always hesitates before lying down.

I was following the dog training curriculum exactly, until I picked up Karen Pryor’s Clicker Training for Cats at a used book store. Pryor recommends teaching your cat to target before teaching other behaviors. Targeting involves walking toward a designated target and touching it with the nose. She recommends teaching targeting first because it is amazingly useful as a base for other things you will probably want to do with your cat. For example, making getting in the carrier more fun (OK, less traumatic) for the kitty. Pryor suggests targeting on a pen, chopstick or the end of a wooden spoon. Cheshire didn’t much like targeting the first couple of times we tried it, so I asked my dog specialist about targeting. When she talked about it, she seemed to take for granted that we would teach a dog to target on our finger. When I tried my finger as a target for Cheshire, he accepted that it could be important to him to nose my finger, and we were off on new training adventures.

Everything I have read about training cats says they will work for about a dozen treats and then be done with the session. At first this was true for Cheshire, but as he gets more proficient and engages in more and more interesting behaviors, he rarely tires of training. Usually he’s still raring to go when I poop out in our morning sessions. We train for 5 to 10 minutes at a time.

His repertoire of behaviors grows consistently. We are currently working toward a figure eight around my legs. (In the video, he goes around one leg and decides that’s enough.) We have worked to get him to accept handling of his paws — you see this with the paw touch in the video — and petting, especially petting from above him. We still haven’t tackled the carrier, but he comes when I extend my targeting finger or call his name, even when he’d rather be menacing Reggie.

The training started as a confidence builder, and it has worked splendidly!