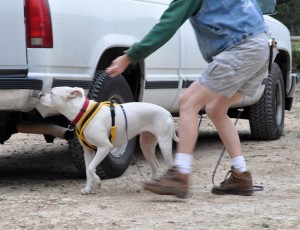 A week ago today I was shivering at Rancho Mondo Northwest Canine Resource Center, outside in Leander, Texas, watching canine teams search for out-of-place odors on four vehicles parked in a field.

I’ll bet most readers probably got an image of German shepherds looking for drugs when they read that. They wouldn’t be completely wrong – there was one German shepherd in the group – but these dogs were all companion dogs who are mastering the discipline of detection dogs while their humans learn how to understand what the dogs are telling them about scents. The teams were practicing K9 Nose Work.

One of this new canine sport’s founders, Ron Gaunt, conducted three days of classes for dog-handler teams that have mastered the foundations of searching in classes with Julie Eskoff. Eskoff is the first certified Nose Work instructor in Texas, and she’s been teaching classes here in Seguin at Thunderpaws Canine Solutions, so I knew a few of the dogs in the class.

A dog doesn’t have to come from a breed known for its hunting or detection prowess; K9 Nose Work is open to any companion dog, even those who have trouble being nice around other dogs. The dogs start their training searching for food, then the humans pair the food with odors that have been adopted by the Nose Work founders. The first odor dogs learn to search for is birch, then they move on to anise and clove. These odors were selected, as least in part, because they aren’t so common in everyday human activities.

The training is all positive. Gaunt says, “It’s a whole lot harder to get a dog to want to hunt when you’re using a lot of negative.”

Dogs get to solve puzzles and run around with their humans too.

Training focuses on letting dogs do what comes naturally to them in detecting the odors and teaching humans how to understand what their dogs are communicating to them. “Don’t think for the dog,” Gaunt said. “Think with the dog.”

Unlike in obedience training and competition, Nose Work’s focus is on the dog. In obedience, if the dog loses focus on the trainer, you don’t do well. Not in Nose Work. The trainer needs to be focused on the dog. The training works with dogs’ instinct that odors are very important to their survival, building the importance of the odor to the dog. When a dog thinks the odor holds the key life or death, she will throw herself fully into the search.

I say “she” on purpose because all but one of the dogs working in the class are female. The group I saw included English setters, a German Shepherd, Brittany spaniel, Irish wolfhound and beagle mixes. Probably none of these breeds’ ability to search something out for humans surprises you. I also got to watch an Italian greyhound, an Australian shepherd, a poodle, a dachshund and several pit bull terriers search and find odors on vehicles, in fields, in a barn and an office and in suitcases.

The communication is vital to the team’s success. “Every body movement is a communication that the dog is putting out,” Gaunt said and encouraged the handlers to figure out how to help the dogs instead of trying (or accidentally) leading their dogs.

Gaunt pointed out that companion dogs are used to cuing off their humans. Our companion dogs think we have the answers to puzzles, or that we need them to take care of us, or both. Nose Work gives dogs the opportunity to lead. Dogs can recognize and locate scents in their sleep, it seems, and humans just don’t have that ability. Humans get a super opportunity to learn how our dogs communicate to us in this sport. Observers learn a lot too!

I hadn’t ever thought about how odor flows with the wind and along the ground before. Now, I know that if I watch a dog follow an odor, I can predict where it’s coming from. In the few hours that I observed Nose Work training, I began to have some success in understanding where the dog would go next in her quest to find the source of an odor and win her reward.

I’m inspired to try some Nose Work myself. I’m lucky to have friends who let me play with their dogs, and I’ve got a canine partner lined up to get a bit of experience. Eskoff told me that she’s using Nose Work in shelters with great results, and I’d like to learn more about that, too.

And of course, the kitties will be testing their noses once I’ve learned how to introduce them to the practice. Cats enjoy mental stimulation and food rewards (almost) as much as dogs, and I think Meggy will really enjoy hunting for odors around the house!

Cheshire has an article on Nose Work coming up in The Anipal Times, too. I’ll update the link once it’s published.

2 thoughts on “Sniffing Out the Possibilities of K9 Nose Work”