A lovely long-haired kitty showed up at the dog rescue just before July 4. Carol, the rescue doggies’ human, doesn’t know much about cats and has an allergy as well, but she brought the kitty in and took her to the vet because she seemed to be pregnant…

Well, she WAS pregnant. Carol’s accountant asked one of her friends to house mama kitty till she had her kittens and weaned them. She did have the kittens, — five of them — in an auction warehouse a few miles from here on the road to San Marcos.

The humans made a plan to move the cat family to a foster home, but there was a glitch in the plan. Mama kitty ended up going to the foster home and the kittens stayed in the auction warehouse! Although the kittens were only three weeks old, the mama had apparently weaned them already, but Robin was worried about them and making a lot of phone calls.

A couple of weeks passed, and the caregiver at the warehouse said the kittens really needed to move on. The accountant took a carrier up to her to round up the babies and bring them to the dog rescue. In the meantime, Robin started looking for a nice person to foster the kittens. Our neighbor stepped up and said they could come to her house till the adoption event scheduled for Sept. 22.

This is where the story really gets interesting. The caregiver could only catch two of the babies on Sunday. Robin and Carol picked up the babies at the accountant’s house and took them to their new foster home. We don’t have a kitten cage, so Carol lent us a pretty big wire dog crate for the kittens to stay in. Robin let them out of the carrier into the cage and the golden one was OK with that. The gray and white one was decidedly against it and immediately slipped out through a big gap in the wires.

The humans tried to catch that kitten again and gave up finally. They decided that the kitten was used to hiding under antique furniture and was in a safe place in the living room. They used towels to plug the gaps and give Sunshine something to cuddle inside the cage and books around the outside to discourage him from even THINKING he could get out. They called them Sunshine and Shadow, for obvious reasons, and made a plan to coax Shadow to go in with Sunshine as soon as possible.

Meanwhile, two more of the babies were rounded up — another gray and white one and one who looks like a Himalayan — and arrived on Monday. Robin had a better plan and got them into the cage with Sunshine. Those new babies hissed at Robin, just like Sunshine and Shadow had on their first day, but all but Shadow have warmed up to her already. The kittens’ foster mom named the Himalayan-type kitten Smoke, but the other gray and white one hasn’t suggested a name yet. 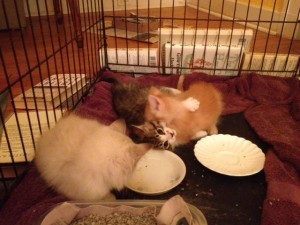 Last night, with the help of smelly fishy cat food, the humans (UH helped too) finally convinced Shadow to go in the cage with the other kittens! They let Shadow get comfortable with eating and playing in the room while they were there, then they left the cage door open while two kittens napped in corners and Sunshine cuddled with Robin. Shadow went in to get a drink of water. She’s (we think she’s a girl, and we’re sure Sunshine is a boy) a couple of days behind the others getting used to the humans because she was under the couch or the buffet all the time that Robin and their foster mom were teaching the other three that she had good noms and toys and a lot of good will for them. This all took a VERY LONG time and included some hissing, hiding, approach, retreat, and hanging around the outside of the cage wanting desperately to get in with the siblings while also avoiding the humans. 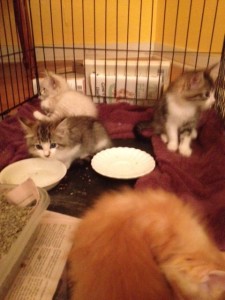 I think Shadow is shy and hope she will come around quickly. These humans are all right! But then, it took me a few years to admit that.

The fifth kitten — another orangey — got lonely up there in the warehouse and allowed himself (just a guess on gender) to be captured. Maybe he should be called Desperado because he came in from riding fences! That’s what @Katieboocat said. Robin will pick him up this afternoon and reunite him with the rest of the siblings.

The unnamed kitten is the biggest, Smoke is next. Shadow and Sunshine are about the same size now. Sunshine was really little and skinny when he came, but he’s already filling in nicely in just three days.

They don’t think humans are so scary now, which is really good! Sunshine is really excited about humans, actually. They are playing with toys and eating Babycat kibbles from Royal Canin, which is the food I had when I was their age.

These babies are getting socialized and they will be ready for adoption!

5 thoughts on “The Rescue Kittens”