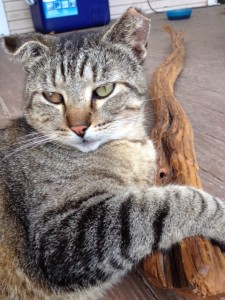 Mystery is cuddling Robin’s sculpture-in-progress in this picture, but right now he’s recuperating from some bite wounds in the garage. He would like it very much if you would send some good thoughts his way.

His immune system isn’t what it used to be and so he needs lots of support when he’s hurt and sick. He had SIX cat bites near his tail that had to be cleaned.

Robin took him to the emergency vet today and his fever was 103.7. He got some medicine, subcutaneous fluids and a sedative because he was in a pretty bad mood about all this. In fact, that mood was the deciding factor for Robin to take him RIGHT AWAY.

The emergency vet said Mystery was getting some pretty good care for a community cat. If he could only see what Mystery has going now! He’s got an old damask tablecloth lining his space and Robin’s old, organic terrycloth bathrobe for his bed!

He’s never been in the house with us before, so we are gradually taking a sniff or two at the towels over his Kritter Kondo. He might be in recovery for two whole weeks.

We all pledged to try to be nice, and Robin sprayed the Spirit Essence, “Peacemaker” around his Kritter Kondo (we have the red one with the awning). She’s also drawing his picture with her markers.

Read the origin of A Cuddle a Day.

If you would like to propose a picture for a Guest Cuddle, contact me on Twitter @CheshireK or email me at cheshirekitten at sbcglobal dot net.

2 thoughts on “A Cuddle a Day: Healing for Mystery”