Cheshire is waiting for me to install shelves throughout the house for his climbing pleasure. Chances that the shelves will make it onto the walls this weekend are limited. He’s also waiting for me to put up a sturdy, stable cat tree for him to climb. We’ll make some progress on the cat tree by testing to see if the pole is long enough to work with our ceilings. If it is, we’ll have a pole, but no platforms for a cat to sit on.

I’ve never seen a cat shimmy up a pole, so it looks like he’ll be waiting until I order some platforms to clamp on the pole. I’m considering the DIY version of platforms from Franklin Cat Furniture. We’ll let you know what we settle on.

Cheshire has mentioned his clicker training in passing, and I wanted to share more details about what he’s doing. First, he loves to train and gets a bit miffed if we don’t train first thing in the morning. He does forgive me if I get to the training later, but if we don’t train for a day or two, he ignores me. 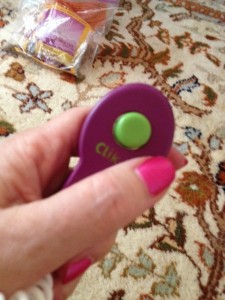 We started training in May using a quiet clicker I got at my local dog boutique/training center/salon, Thunderpaws Canine Solutions. Most clickers have a bit of a harsh sound, and I didn’t want to scare him with the sound that I intended as a signal of good things. We spent a few days “loading the clicker.” That means I clicked and gave him treats until he figured out that click ensured that a treat was coming right away.

Since I have been observing and taking elementary dog training classes at Thunderpaws, I followed the plan from class. The first behavior Cheshire trained for was sit. We worked on down (for lie down) after that. He learned both sit and down very quickly.

Nutmeg watched him training, and she picked up sit to get treats in minutes! Learning from observing another learner is called social learning, and I read in Temple Grandin’s Animals Make Us Human  that cats are superior social learners. They respond best to watching someone else learn, rather than to watching a skilled cat perform. Nutmeggy’s sit supports this.

Cheshire avoids touch to his paws, so I decided to use the clicker and treat method to encourage him to accept contact with my hands on his paws. He JUST HATED me touching his paws, but he started to tolerate it to get the treats. One day, he decided to find out if I was able to understand his communication to me in training session, and he reached out to touch MY hand with HIS paw.

Now, when I ask him to touch my hand with his paw and he does, he gets a treat. He’s a lot happier with this behavior, and claw trimming is much easier. For most of his life, he only had claw trims at the vet. After he decided to cuddle, I would spend a couple of hours with him every so often to trim one claw at a time. Between claws, he got up and moved around the room. He came back, and when I trimmed the next claw, he would pop up again. After training to desensitize paw-hand contact, he lets me trim all the claws on one foot before he gets up for a break. Ten minutes or so, and we are all done!

The training session provides a few minutes of deeper communication between us. He trusts that I will “listen” to him and he does his best to figure out what I’m trying to tell him. We are not always quick to understand each other, but when we do, the moments are amazing! 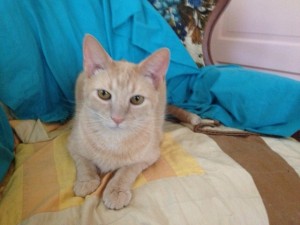 We picked up targeting next. I asked him to touch his nose to the end of a pen that could then be used to lead him around. He couldn’t understand why in the world I wanted him to nose a pen, but he did it. My training mentor told me that he could target my finger. Cheshire understood “nosing” my finger much better. He now follows my finger to jump up on his chair, a cabinet, a chest and even to step onto a pillow (which he doesn’t like all that much). I asked him to get in his blue bed by targeting, but he preferred not to.

Cheshire’s confidence grows every day. He’s adding new behaviors to the list of things we practice all the time. This week Cheshire suggested that we work on sit up. I did ask my training mentor, who specializes in dogs, and check a book to see if professional cat trainers had advice for training this behavior. Actually, it turned out that he and I came up with pretty much the same ideas as the pros!

Cheshire’s history of anxiety suggests to me that he will always be a stay-at-home cat who “performs” for his own and his family’s satisfaction. Although he is gaining skills that a cat actor or service cat would use outside the home, our main goal in training is to give Cheshire intellectual puzzles to figure out to enrich his life in general. Now that he’s thinking and seeing results, he hardly ever gets worried. He’s venturing a bit beyond his comfort zone and having great results.

Training with Cheshire, and with Tiko the rescue doxie, is really fun for me too. I love learning languages, and training is just that, a language for communicating with someone who lacks the ability to speak words.

I can’t wait to bring my human students into this world with us. My training mentor will teach a six-week course in positive reinforcement training to a group of university students and rescue dogs as part of a course I teach on leadership. I’m so excited about this course that I’m ALMOST ready to let go of summer break. Almost.

3 thoughts on “Our Clicker Training”