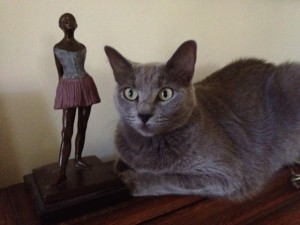 Robin took this very special picture of Karma for her Gotcha Day, which was exactly one week ago today. UH saw the little gray kitten and, more importantly, heard her in the grass at the abandoned house across the street. She came inside and told Robin there was a kitten over there.

Robin went out. It was just starting to sprinkle when she found Karma over there. She reached out to her, and Karma came, singing like a diva. She almost got called Diva because she was so demanding. Actually, that’s why she’s called Karma! She shows up and you have to deal with her.

Anyway, Robin brought the little kitten into the garage and looked at UH, who said, “What are we going to do with her?”

“Keep her, of course,” Robin said. “If she was someone’s kitten, they don’t deserver her.”

Robin took Karma to the vet to get rid of her fleas and get a health check. She turned out to be FINE, and she still is fine five years later.

4 thoughts on “Karma Is Five”