Wow, have we been busy in the last two weeks!  First, we had to help our Robin start a new semester. She needs a lot of support when she has to go back to campus. Lots of cuddling. I was EXHAUSTED right along with her.

Then, our DSL went out. AT&T couldn’t fix it for days, so we couldn’t post updates. Robin is pretty good on her phone but not good enough to blog with it.

THEN, we helped her rescue some kittens. Not just any kittens, but a family of kittens from North Carolina who have come to be known as the CHEESE Kittens.

The Cheese Kittens were born near TigerBoytheCat‘s Auntie D, and she brought all four kittens and their mom in from the street. They went into boarding at a local vet while Auntie D looked for a rescue that could take them in.

After an EXHAUSTIVE search in their area and the entire state of North Carolina, it turned out that the only place with space for the kittens was OUR HOUSE! Robin got help from Dorian at YourDailyCute and her Cute Transport Network to get them a ride here. While the DSL was out, Robin slipped away to pick up the Cheese Brothers, who are here now. 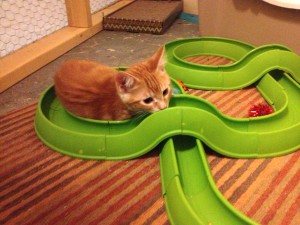 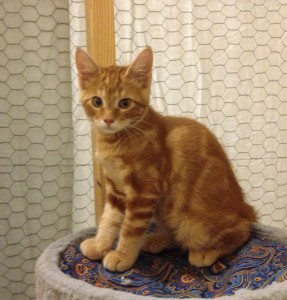 The Cheese brothers finished off the little blue house that Petie started to destroy in January and Nutmeggy wrecked a little bit more. They are also shredding the condo that Lexie slept on. Of course, Robin got that condo back in the ’90s for Miss Niki and Miss Matilda, so it’s not a tragic loss.

UH has ordered a brand, new cat tree for the Cheeses. It will get here tomorrow and those boys will PLAY! 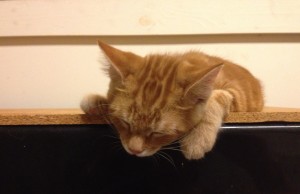 They have been here for three days and are getting really social. We had been a little concerned about how much they would like people after spending almost three weeks in kennels at the vet. All the boys purr a lot when Robin and UH are around, and Cheddar, Colby and Bleu curled up in her lap this morning before work. They like to give both UH and Robin toe baths, too.

The Cheese boys won’t be here long before they are ready for forever homes.

5 thoughts on “Keeping up with the Cuddle Family”