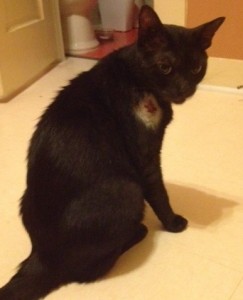 I know he’s not cuddling in this picture, but I can assure you that Reggie has the place of honor on Robin’s bed tonight.

Robin counts on Reggie to wake her up in the morning because he’s hungry and just a little bit rude, but this morning she SLEPT IN till almost 6:30. No Reggie. No Reggie even when she made noise with the kibbles. She called him. No Reggie.

He was curled up in the purple chair when she found him, obviously feeling bad. The humans didn’t notice the injury on his shoulder till much later. And Robin couldn’t take him to the vet until afternoon.

It turns out that he had a large abscess and a high fever. We don’t know if he got in a fight when he went on his outside adventure a week ago or if Meggy just gets a bit too violent in her play fighting. In any case, he got antibiotics and has started eating again (including the Neosporin that’s supposed to help protect his wound. Sigh.).

Read the origin of A Cuddle a Day.

If you would like to propose a picture for a Guest Cuddle, contact me on Twitter @CheshireK or email me at cheshirekitten at sbcglobal dot net.

2 thoughts on “A Cuddle a Day: Reggie again”