in the Features section of The Anipal Times 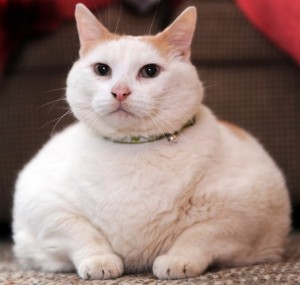 The namesake of the Prince Chunk Foundation passed over the Rainbow Bridge a few days before Thanksgiving. The overweight kitty brought attention to the plight of pets who lose their homes and families to economic distress and house foreclosures in 2008 when reports that he weighed 44 pounds got him on all the major talk shows, the Philadelphia Inquirer reported Sunday.

Prince Chunk’s family withheld the announcement of his death until after the holiday to give themselves time to grieve before fielding attention from reporters. Indeed, the news wires were inundated with stories about him as I was reporting this story.

Although Prince Chunk was celebrated for his girth, he shared the experience of thousands of companion animals who have been abandoned during the recession. He was about 10 years old at the time of his death. He weighed about 17 pounds, much less than the 44 pounds that caught reporters’ attention in 2008.

Vince Damiani, Prince’s human, noticed that his health was deteriorating a couple of weeks ago. “He was breathing a little heavier. Nothing too serious, but it was noticeable,” Damiani told the Philadelphia Inquirer. The vet told Damiani that Prince Chunk’s health problems were the result of congenital heart disease. The kitty initially responded to medication, but within a few more days he began to fail again. He left for the RB from a sound sleep.

“Prince Chunk’s legacy will continue to live on through the Prince Chunk Foundation,” Damiani told the Inquirer.

Prince Chunk drew attention to the effects of the recession on companion animals through a spate of media attention that mostly centered on his large size. The Prince appeared on such programs as Live with Regis and Kathy Lee and other national news programs and talk shows in 2008 while he was still at the Camden County Animal Shelter. The media attention to the chubby kitty brought 500 requests to adopt him. Prince Chunk, who was thought to be female at the time, moved in with the Damiani family of Blackwood, N.J.

Damiani started the Prince Chunk Foundation earlier this year to help pet owners with financial problems in New Jersey, New York and Pennsylvania continue to care for their companion animals, according to the New York Daily News in June. The foundation’s website was swamped with traffic Sunday when the media began reporting his death. Struggling pet owners can turn to the Prince Chunk Foundation for help with food and veterinary care, according to the New York Daily News.

Another New Jersey non-profit organization will care for companion animals so their guardians can focus on resolving their troubles. According to nj.com, Laura Pople is the force behind, Seer Farm, a temporary sanctuary for pets that currently houses 20 dogs and 65 cats.

Pople raised the money to buy the farm, volunteers as executive director and raises money to continue caring for the animals. She is a professional psychologist and understands the importance of the bond between the humans and their companion animals. She wants to help the humans maintain the stability of the relationship while they are struggling in other ways.

“We hear of a lot of people living in cars. Often the animal is giving them continuity, giving them a kind of hope,” Pople told nj.com.

More than 70 volunteers help care for the animals at Seer Farm. Although some of the pets have stayed for more than a year, almost all of their families have come back to pick them up.

The director of the Humane Society Pets at Risk program told nj.com that Seer Farm is the only shelter in the United States that doesn’t force humans to cut all ties with their pets when they leave them.

The shelter asks humans to contribute $50 monthly to the car of their pets and encourages visits. Volunteers rejoice when the owners are able to reclaim their companions.

My human helped me with some research in the Lexis-Nexis database for this story. The photo was originally published by Rob Fruth on picasaweb.com.