in the Special World News section of The Anipal Times

Tali was rescued after Hurricane Katrina and found a home in Guelph, Ontario. 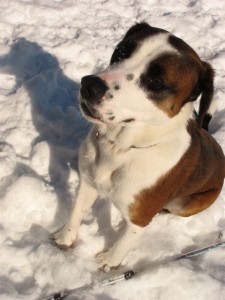 Shelters in the United States, particularly in the South, are full, full, full, but some humans have found that taking dogs to Canada is helping to rescue more dogs, The Globe and Mail in Toronto reported.

Networks of volunteers first have to spring the dog from the pound, which can cost as little as $84 or as much as $450, according to comments on petfinder.com. The dog must have a clean bill of health and certain vaccinations to enter Canada, so everyone has to visit the vet. After the vet check-up, volunteer humans foster the dog until a transportation chain to get to a rescue in Canada is lined up.

Other groups and networks of volunteers are running transportation routes through Pennsylvania and New York as well.

Canada used to charge duty on the dogs, but Revenue Canada finally agreed to value rescue dogs so that they don’t have to pay to get into the country. However, dogs do have to have their documents in order. You can find out about the rules from the Canadian Food Inspection Agency.

The few comments on the Globe and Mail story reveal Canadian humans’ compassion for animals and connect directly to one of the dogs who found a forever home in Canada.

“She is a joy to have around,” wrote ShirleySalter1 about Sophie, a special-needs Chihuahua who came from Kentucky. “We went to Woofstock again this year and she loves to meet the dogs and people while strolling around in her wheelchair. I thank Lucy Moye from Open Arms for helping arrange the transport to get her out of the shelter and to us and to LOYAL Rescue for letting us foster this bundle of love and to adopt her.”