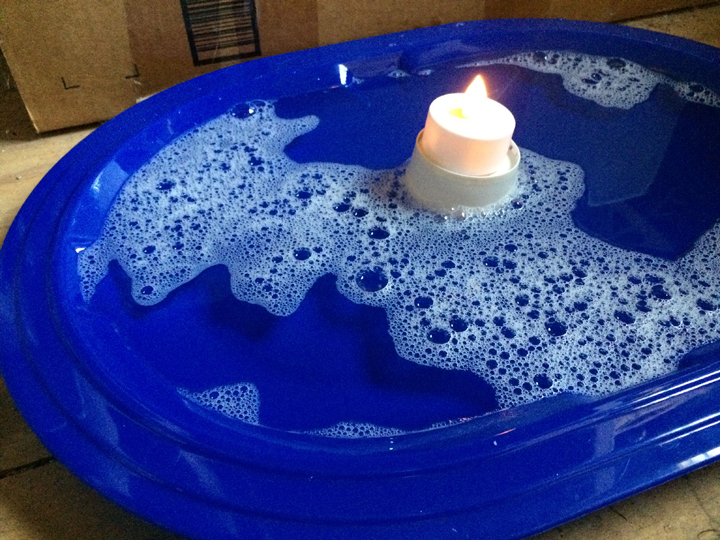 I worked hard nursing Robin through her injury, and I’m glad to say she is back to her usual antics. She decided to set traps for fleas.

Before you laugh too hard, I’ll fill you in on the context. We get Revolution every month, but its effect peters out after about three weeks, sometimes two. This doesn’t affect everyone, but those of us who taste really good to fleas end up getting a couple. Poor Reggie (I never thought I would say that!) even gets a tapeworm now and then. In any case, this situation in unacceptable, and Robin needs to take care of it!

Robin and U.H. are committed to living “green,” which means they don’t want to insert poisons into the environment if they can in any way avoid it. They don’t like it that we have to have Revolution, but the climate here is really good for fleas, and it seems the consequences of having fleas are a lot worse than the consequences of having Revolution.

We have a xeriscape rather than a traditional lawn, so there are lots of places outside for fleas to hide. Those outdoor fleas can get into our catio because they are small. Our house is big and old and Robin suspects that some fleas are hiding in here.

Robin has a strategy for outside the house. First, she’s got a big bag of diatomaceous earth (food grade) to put out. The second line of defense is a can of stuff to spray. She got it from our veterinarian, and one spraying is supposed to work for an entire seven months.

Treatments for the inside of the house raise some problems. Cleaning is a clearly winning strategy. For the past year Robin has been cleaning out areas inside the house that might have been neglected and become hospitable to fleas. Lots of vacuuming and removing old boxes of stuff. She cleaned a lot more dust and boxes out after Brie’s asthma attack in January.

There’s the big complication for thoroughly treating the inside of the house, either with a “green” or traditional flea-removing pesticide. Brie and I both have really sensitive lungs. One plan was to take us both to board at the vet and spray all over the house during spring break. Robin’s injury through us way off that plan because it’s spring break now, and it doesn’t look like Brie and I are going anywhere. *heavy sigh of relief*

Now, you will understand the flea traps better.

Robin was reading about diatomaceous earth and discovered on The Bug Squad that it is possible to trap fleas. She had never thought about this before and decided to try it. The traps are made with soapy water and tea light candles. (Robin used the battery operated type rather than the ones with actual flames.) She used cheap plastic platters, filled them with soapy water, put the tea lights in the middle of the platters on a base of paper cups she had trimmed to just keep the light above the water. 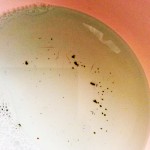 She put traps in three attic spaces and one area of the garage the other night. AND ACTUALLY CAUGHT SOME FLEAS! The little dark dots in the water are the flea bodies (the big stuff fell into the water in the attic).

She is going to use the traps to pinpoint the areas of the house that must be treated to kill flea eggs. First will be the attics. She hopes that spraying can be limited to the attic areas, the catio, and outside. Brie and I stay downstairs, so we won’t be affected by the spraying in the attics. The catio can be closed for as long as needed for the spray smells to dissipate. With this strategy, we wouldn’t have to board at the vet. Those people are OK, but I like to keep my visits short.