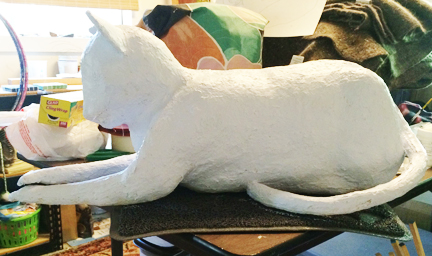 A few months ago Robin started spending time with the biggest and weirdest cat I’ve ever seen. That cat was really skinny too. I didn’t know what to make of the new cat. He smelled kind of like a box.

Brie checked the cat out too.

He didn’t know what to make of that cat either. We both wondered How come that cat hadn’t been eating enough when we have plenty of food around here. We also wondered what happened to his ears. 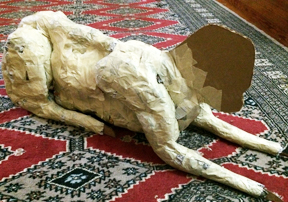 We figured that cat had been living in difficult circumstances because now that he was at our house he started to gain weight. I was pretty skinny when I was sick, but I hope my head was never so flat! At least this guy was starting to regain some muscle. 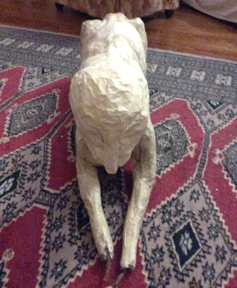 A few days later, his head started to fill out too. He kept startling us whenever we would walk into the sunroom. The cat would be there, and we would have forgotten about him. I don’t know how many times Colby jumped practically to the ceiling. Bleu wasn’t so welcoming and growled at the new guy once or twice. 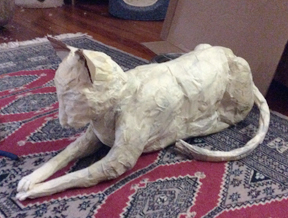 inally, the new guy found his ears and tail. We were even more concerned about this guy moving in, now that he had all his parts. At least the new cat didn’t stare at us. 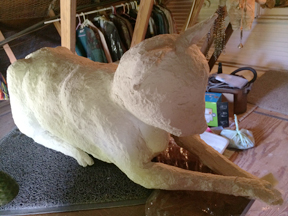 The sun finally came back out. It got super hot. This guy thrives on heat. He started to fill out all over.

He stayed up in the attic where I used to go when I didn’t feel well.

Robin even put him in the OVEN! He smelled kind of like bread.

Most of us would burn in such hot temperatures, but this cat is now periwinkle blue. 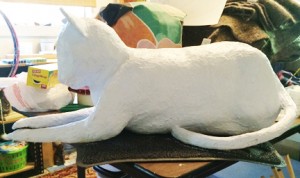 2 thoughts on “A Big Cat From Nowhere”